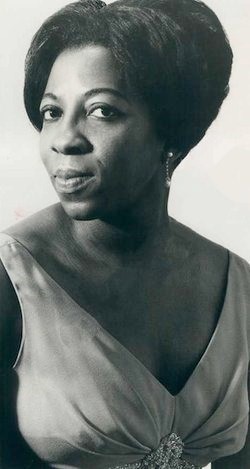 International Lyric Spinto Soprano Ella Ruth Lee was born on June 10, 1933, to Winston Lee and Mary Ella Lee in Tyler, Texas. She was reared in Los Angeles and began piano lessons there. From 1947 to 1951, Lee was a student and member of the choir at Jefferson High School in South Los Angeles. After graduating in 1952, she enrolled in Los Angeles State College of Applied Arts and Sciences (now California State University, Los Angeles) where she received a Bachelor of Arts degree in music in 1955.

Lee, who performed principal roles throughout Europe and the United States for more than thirty years, made her operatic debut in 1960, performing the part of the Ethiopian Princess in Giuseppe Verdi’s Aida in the Guild Opera Company in Los Angeles. In 1963, Lee performed the soprano role of “Floria Tosca” in Giacomo Puccini’s Tosca with the Komische Oper Berlin in East Berlin, Germany. She commuted for rehearsals from her West Berlin living quarters. In addition to performing major operatic compositions, she also played the “Empress” in Richard Strauss’ “Die Frau ohne Schatten” and the principal soprano part in Beethoven’s “Ninth Symphony” in Germany.

Upon returning to the United States in 1968, Lee was once again invited in to sing the principal role in Aida, this time with the Seattle Opera in Seattle, Washington. Over her career she performed Aida more than 500 times with opera companies, including the Los Angeles Opera, the San Francisco Opera, the Vienna State Opera in Vienna, Austria, the Bavarian State Opera in Munich, Germany, and the Royal Opera House, Covent Garden in the United Kingdom.

In 1995, Lee and her husband, tenor, Arturo Romani, performed bel-canto duets and music of Verdi, Pietro Mascagni, and Abdul Hamid in the Middle East at the Royal Cultural Center of Amman in Amman, Jordan, and the Center for American Studies and Research American University in Beirut, Lebanon.

After retiring from the opera stage in 2000, Lee and Linda Jackson founded Opera Pasadena Company that year and served as its first artistic directors. Also in 2008 Lee played a pivotal role in establishing the Los Angeles Metropolitan Opera.

Ella Ruth Lee Romani, an operatic trailblazer, died on September 16, 2013, in Los Angeles, California. She was 80.