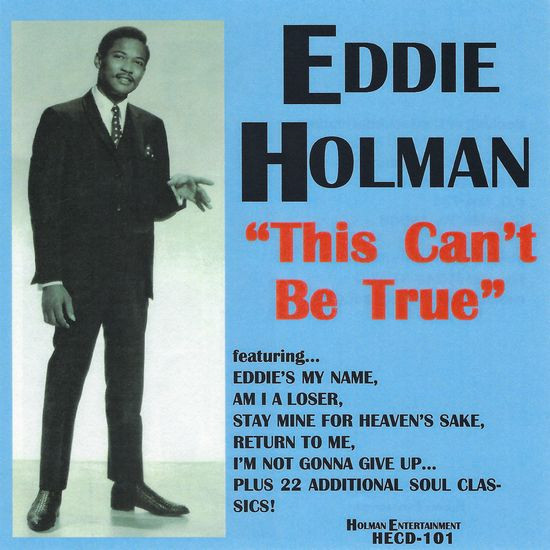 Rhythm and Blues singer Eddie Holman was born on June 3, 1946 in Norfolk, Virginia and introduced to the piano and guitar at the age of 2. In 1954, his family relocated to New York City and two years later Holman won first prize at the Amateur Night at the Apollo Theater. After this award, he became a regular performer on NBC’s The Children’s Hour and was named “Little Eddie Holman.”

Holman attended Victoria School of Music & Art in Harlem, where he was instructed in the technical and performance aspects of music production. The Holman family moved again to Philadelphia, Pennsylvania, where Eddie attended Overbrook High School and graduated in 1964. Afterward, he enrolled in Cheyney State University in Cheyney, Pennsylvania. During the ending of his freshman year in 1965, he and Solomon Burke joint penned “This Can’t Be True” which he released the following year. The song peaked at no. 17 on the Billboard R&B chart and no. 57 on the Billboard Hot 100 chart. His second recording, “Don’t Stop Now “reached no. 104 on the U.S. chart That year, 1966, he also cut the single “Am I a Loser from the Start” that reached no. 17 on the R&B chart.

Holman received a Bachelor of Arts degree in music in June 1968. And on October 29 of that year, he married Sheila Holmon, and they parented three children. In 1969, Holman’s album, I Love You, featuring the single “Hey There Lonely Girl,” peaked at no. 2 on the Billboard Hot 100 and no. 4 on the Billboard R&B chart as it sold more than one million copies. The song became Holman’s greatest hit.

From 1978 to 1981, Holman left the music performance industry to work for Xerox. In 1982, he began doctoral studies in theology at the International Bible Institute and Seminary in Lagos, Nigeria and was ordained into the ministry in 1984. He then accepted an associate pastor position at Faith Fellowship Baptist Church in Philadelphia. In 2007, Holman was celebrated at the Apollo Theater in Harlem as a legend for his 50th Anniversary in the performing arts.