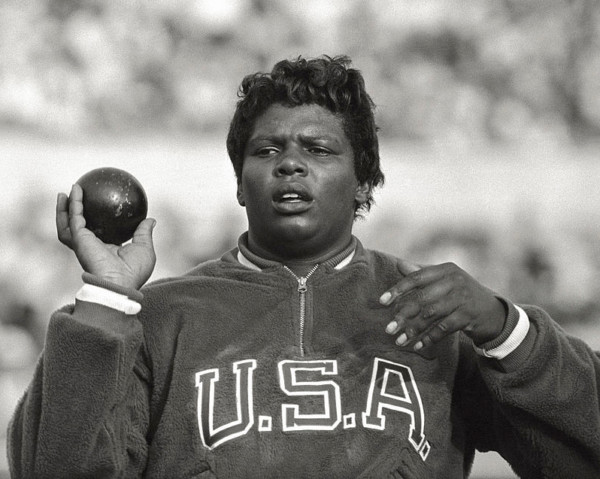 Earlene Brown, 1960
Fair use image
This entry is sponsored by Phylisha Agbor, and dedicated to her granddaughter, Chinelo Peters, a future shot put and discus Olympian.

Earlene Dennis, born July 11, 1935, in Latexo, Texas to Espenola Tillis Dennis, a domestic servant, and Willie Dennis, a semipro baseball player with the Negro League in Texas. When her parents separated in 1938, Dennis remained with her mother and they moved to Los Angeles in 1945. Dennis’s mother married Julius Walker in 1946. Dennis attended Jordan High School in South Central Los Angeles, where she excelled in track and field. Her athletic ability was noticed by many, including Adeline Valdez, Dennis’s high school gym teacher, Josephine Spearman, and Coach Clarence Mackey, who tried to get her to compete in the Helsinki Olympics (in 1952 in Helsinki, Finland). Valdez is credited with putting the first discus in Dennis’ hands while her history teacher taught her to shot put. Before competing in shot put and discus, Dennis anchored the relay team.

After graduating from high school in 1952, Dennis attended Compton Junior College and completed a machinist training program. She then joined the Amateur Athletic Union (AAU) at 21 after marrying Henry Brown, a brick mason. The couple had a son, Reggie, born November 14, 1955.

In 1956, Brown finished in the top ten in the shot put and the discus. In 1958 Brown received the #1 world ranking and became the first American to break the 50-foot barrier. Brown won gold medals in the shot put as well as discus events at the Pan American Games in 1959. At the Tokyo Olympics in 1964 Brown placed 12th in the shot put.

Brown retired from the shot put competition in 1965. The same year she took up another sport, roller derby. Brown’s career in skating began as a blocker for the New York Bombers.

In 1975, Brown retired from all athletic ventures and worked as a beautician to provide for herself and family. On May 1, 1983, Earlene Dennis Brown passed away in Compton, California at the age of 47. On December 1, 2005, Earlene Brown was posthumously inducted in the National Track and Field Hall of Fame by the USA Track and Field (USATF) Association during the Jesse Owens Awards and the Hall of Fame Induction Ceremony in Jacksonville, Florida.