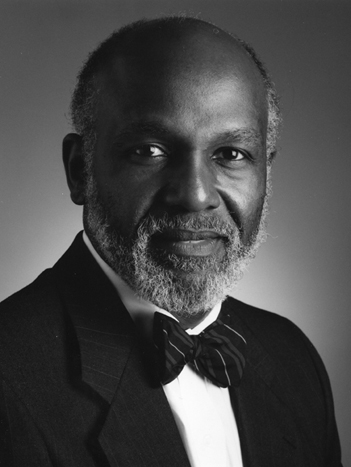 Aerospace engineer Wesley Leroy Harris was born on October 29, 1941 in Richmond, Virginia. His parents, Rosa Minor and William Harris, were both workers in local tobacco factories. Harris graduated from Richmond’s Armstrong High School in 1960. He then married his high school sweetheart and enrolled at the University of Virginia.

While at Virginia, He received an award for his research into the flow of air over wing surfaces from the American Institute of Aeronautics and Astronautics (AIAA), and Harris was selected to introduce Dr. Martin Luther King Jr. when the civil rights leader visited and spoke at the campus in March of 1963.

Harris graduated in 1964 with his Bachelor’s Degree in Aerospace Engineering. During his time there, Harris became the first African American to become a member of the Jefferson Society, the elite debate group. Harris then enrolled into Princeton University, graduating with his Master’s degree in Aerospace and Mechanical Sciences in 1966, and completed his doctorate there in 1968.

Harris returned to teach Engineering at the University of Virginia, making him the first African American to receive a tenured faculty position and the first to teach the subject. He took a leave of absence in 1970-1971 to teach Engineering at Southern University and returned to Virginia as an Associate Professor, remaining there until 1972 when he became the Profession of Aeronautics and Astronautics at the Massachusetts Institute of Technology (MIT). His first contribution to the Institution was to establish MIT’s first Office of Minority Education in 1975.

Harris briefly left MIT to work at NASA in 1979, as Manager of Computational Methods and the Office of Aeronautics and Space Technology, as well as Program Manager in the Fluid and Thermal Physics Office. He returned to MIT in 1980 and held various positions for the next five years. He was appointed Dean of the School of Engineering at the University of Connecticut in 1985. From 1990 to 1993, he served as Chief Administrative Officer and Vice President at the University of Tennessee Space Institute, and from 1993 to 1995, Harris was Associate Administrator for Aeronautics at NASA, responsible for all programs, facilities and personnel at the facility. Harris returned to MIT in 2003 and became the head of the Aeronautics and Astronautics programs.

Harris’ research has spanned many areas including unsteady aerodynamics, aeroacoustics, as well as sickle cell disease. He is credited with more than one hundred and thirty-five technical papers and presentations and has held numerous endowed professorships and tenured lectureships. His many honors and achievements include serving as Chair and Member of the U.S. Army Science Board, The National Science Foundation, and the National Research Council. He also holds numerous honorary Degrees from some of the most prestigious U.S. institutions for his works in the Aerodynamics and Aeronautics fields. Currently, Harris is the Charles Stark Draper Professor of Aeronautics and Astronautics and Housemaster of New House Residence Hall at MIT.