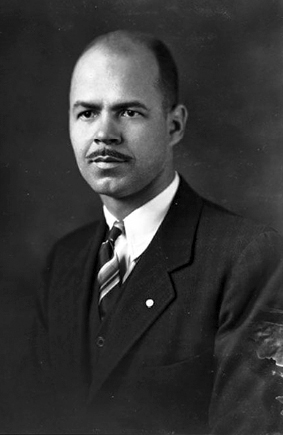 Doxey Alphonso Lewis Alexander Wilkerson, communist, Marxist, professor, author, editor, and union leader, was born April 24, 1905 in Excelsior Springs, Missouri to Mattie L. Wilkerson of Kentucky (1884-1955) and Methodist minister Alphonso Wilkerson. A 1921 graduate of Sumner High School in Kansas City, Kansas, Doxey Wilkerson earned a University of Kansas English B.A. in 1926. Active in the YMCA while at KU, he co-edited the student publication The Dove, pledged and became president of the campus Alpha Phi Alpha fraternity chapter, and obtained an M.A. in Education from KU in 1927.

Upon graduating from KU, Wilkerson became an assistant professor at Virginia State College, Petersburg, Virginia. He started his doctorate studies at the University of Michigan in 1933 but completed them at New York University, earning a Ph.D. in Education in 1959.

Wilkerson taught at Howard University, beginning in 1935 where he was an associate professor and summer school director until 1943. While there he was president of the campus’s Teacher’s Union in 1936 and the following year was appointed to President Franklin Roosevelt’s Advisory Committee on Education. In 1942 he was appointed to the Federal Office of Price Administration (OPA). From 1939 to 1940 Wilkerson served as a research associate for the Carnegie Corporation sponsored “Study of the Negro in America,” and he was the American Federation of Teachers (AFT) vice-president from 1937 to 1941. When Marian Anderson was denied access to Constitution Hall, Wilkerson, with Paul Robeson and others, led the effort to move the 1939 concert to the Lincoln Memorial.

By 1942 Wilkerson embraced radical politics believing Marxist scientific socialism would address racial and class inequality in the United States. That year he became vice-president of the International Labor Defense, a communist organization that defended workers including the Scottsboro Boys in the 1930s. In 1943 Wilkerson left Howard University to formally join the Communist Party USA. The author of multiple books and journal articles during his time with the Party, Wilkerson was a Daily Worker columnist, and The People’s Voice (Harlem) editor between 1944 and 1948. He also served as Director of Curriculum at the Jefferson School of Social Science, 1948-1957.

Wilkerson remained with the CPUSA during the worst years of McCarthyism, but finally left in 1957 as the Soviet Union publicly revealed the excesses of Soviet dictator Josef Stalin after his 1953 death.

In September 1959 Wilkerson taught at Bishop College in Marshall, Texas, but was asked to resign in March 1960 because of his involvement in the student protests over Woolworth lunch-counter segregation policies. In 1962, he was a Yeshiva University professor and Education chair serving until 1973 and then leaving to become vice president of the educational consulting firm, Mediax Associates until his 1984 retirement. During his career Wilkerson worked with notable progressive activists such as Louise Thompson and William L. Patterson, Jesús Colón, feminist Eleanor Flexner, and historian James S. Allen.

Wilkerson married Jeanette May in 1928 and they had their only child, Doxey A. Wilkerson, Jr. the following year. In 1944, he married Louisville, Kentucky native Ferda Yolanda Barnett, the YWCA Interracial Secretary, civil rights activist, Marxist teacher, and college professor. They moved to South Norwalk, Connecticut in 1962 where Wilkerson died at the age of 88 on June 17, 1993.