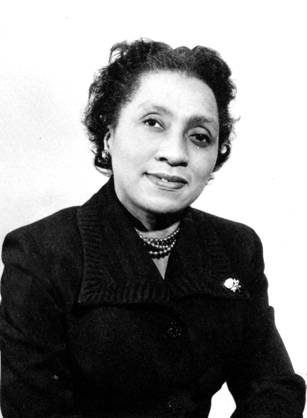 The first African American woman to be admitted as a fellow to the American College of Surgeons (1950), Helen Octavia Dickens dedicated her career to women’s health and well-being, with a particular focus on the lives of young women, low-income women, and women of color. A board-certified obstetrician/ gynecologist, Dickens was a professor at the University of Pennsylvania School of Medicine.

Dickens was born in Dayton, Ohio on February 21, 1909. Her father, Charles Dickens, had been enslaved in Tennessee as a child and moved north to Ohio shortly after the end of the Civil War. It was there he met her mother, Daisy Jane Green, who had migrated to the United States from Canada with her family. Settling in Dayton, the couple had three children. At her father’s insistence, Helen Octavia Dickens attended integrated elementary and secondary schools, deciding to pursue a career in medicine at the age of 12.

Dickens received a B.S. at the University of Illinois in 1932, followed by an M.D. from the University of Illinois School of Medicine in 1934. The only African-American woman in her graduating class, Dickens next completed a 2-year residency in obstetrics at Provident Hospital in Chicago. She then moved to Philadelphia, working with the birthing practice of Dr. Virginia Alexander, part of Asparanto Health Home, a position she would hold for seven years.

In 1942 Dickens returned to school, this time at the University of Pennsylvania Graduate School of Medicine, earning a Masters Degree in Medical Science with a focus on obstetrics. In 1945, she passed the American College of Obstetrics and Gynecology board examinations, making her the first African American woman to hold the certification in Philadelphia.

Dickens’ passions extended well outside the classroom and into the community. In 1967, for example, she founded a Teen Clinic at the University of Pennsylvania aimed at aiding young mothers, one of the first such centers in the country. She also promoted early cancer screenings and prevention, especially in underserved communities. Dickens served on the board of directors for numerous nonprofit organizations, including the American Cancer Society, the Children’s Aid Society, and the Devereaux Foundation.

Octavia Dickens married Dr. Purvis Henderson, a surgeon, in 1943. The couple had two children, Dr. Jayne Henderson Brown and Norman Henderson. Dickens passed away on December 2, 2001 at the age of 92.