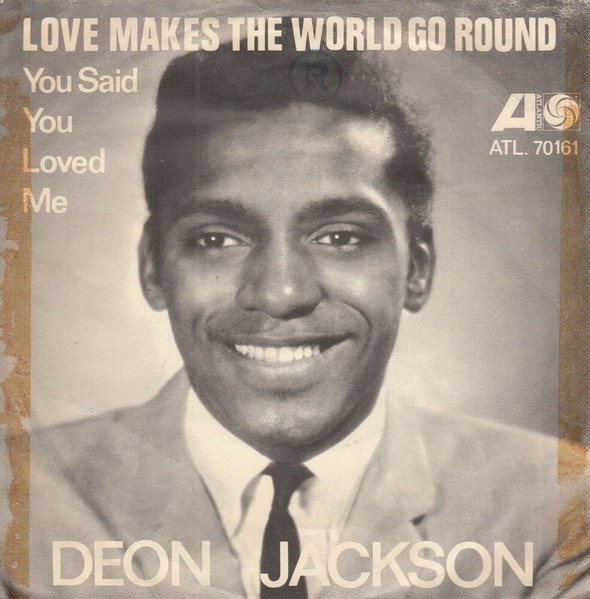 R&B singer Deon Jackson was born on January 26, 1946, in Ann Arbor, Michigan. He played the Clarinet and performed in the band, with local vocal groups, and as a soloist while attending Ann Arbor High School. As a young composer, Jackson was signed by producer Ollie McLaughlin during his junior year. His first singles, all Detroit-area hits, were “Hush, Little Baby,” You Said You Love Me,” “Come Back Home Baby,” and “Nursery Rhymes.” Several of Jackson’s compositions were never released, including “Someday The Sun Will Shine.” He graduated from Ann Arbor High School in 1964. Also, during this period, Jackson performed throughout the Southeast Michigan school dance and nightclub circuit.

In 1971, however, his 1966 hit, “Love Makes the World Go’ Round” was covered by The Odds and Ends and peaked at no. 28 R&B and 83 on the Billboard Hot 100. By 1972, Jackson’s musical career was in decline when he released ‘I’ll Always Love You” and “Life Can Be That Way” for the Shout label. Neither record charted. Jackson also performed in the musical Just Groovin at the Happy Medium Theater in Chicago in the early 1970s and he was a regular performer at restaurants and supper clubs in suburban Chicago.

In 1989, Jackson married Kim Jackson. Afterward, Jackson faded into obscurity and began a second career when he was 54 in the year 2000 as a student supervisor at Wheaton Warrenville South High School in Wheeling, Illinois. He also taught students piano.

On April 18, 2014, Deon Jackson died of complications from a brain hemorrhage at the Northwest Community Hospital in Arlington Heights, Illinois. He was 68.