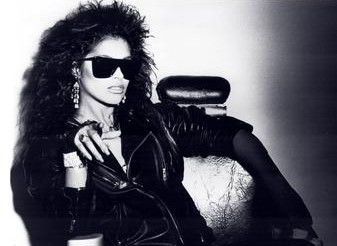 As a teenager, Matthews entered local beauty pageants when she moved to Toronto, Ontario, Canada to become a model. In 1977 at the age of 18, she won Miss Niagara Hospitality. A year later, she unsuccessfully competed for Miss Canada.

At 19, Matthews moved to New York City to further her career. She signed with the Zoli Modeling Agency. At five-foot-six inches tall, she was limited to commercials and photo shoots. In 1980, Matthews had a small role in the film Terror Train, and the following year she was the lead actress in Tanya’s Island.

In 1982, Matthews met the singer Prince (Prince Rogers Nelson) who gave her the stage name Vanity. She became lead singer of a group he managed called Vanity 6. Consisting of three members, Brenda Bennett, Susan Moonsie, and Vanity, the group was known for their sexually explicit lyrics, raunchy choreography, and skimpy outfits. The group released one album, Vanity 6, with one successful single, “Nasty Girl.” Also during this time, Vanity dated Prince.

In 1992, at the age of 33, Vanity became a born-again Christian evangelist. She denounced her stage name and former career name. Vanity. Although she had been in recovery from drugs, she relapsed and nearly died from kidney failure following an overdose in 1994, She survived and later claimed that Jesus appeared and spoke to her. In 1995, Denise Matthews married NFL football player Anthony Wayne Smith, but the couple divorced in less than one year. In 1997, Matthews underwent a successful kidney transplant. She reemerged as an evangelist and spoke at churches in the United States and around the world about her turbulent life. In 2010, Matthews released her autobiography Blame It on Vanity: Hollywood, Hell, and Heaven.

Unfortunately, years of crack cocaine addiction had taken a toll on Matthews’ body. She was placed on peritoneal dialysis five times a day. In 2015, her health worsened, and she was diagnosed with multiple sclerosis and encapsulating peritonitis. Denise Katrina Matthews died on February 15, 2016 due to kidney failure at a Fremont, California hospital at the age of 57. Ironically, two months after her death, Prince died from an accidental drug overdose on April 21, 2016 at the same age of 57.