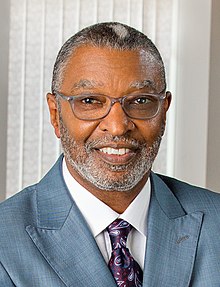 DeForest Blake “Buster” Soaries Jr. is a minister, author, and former secretary of state for New Jersey. Soaries was born on August 20, 1951, in Brooklyn, New York. His parents were both West Indian immigrants and his father was a preacher. After graduating from high school, Soaries first worked as a community organizer, and then for Operation PUSH as a national coordinator. Soaries next worked as an assistant pastor for Mercer County Community College, in Mercer County, New Jersey. He graduated cum laude with a bachelor of arts degree in urban and religious studies from Fordham University in New York City in 1986. Soaries obtained his master of divinity in practical theology from Princeton Theological Seminary, in Princeton, New Jersey, in 1989.

In November 1990, Soaries became the senior pastor of First Baptist Church of Lincoln Gardens in Somerset, New Jersey. He founded the Central Jersey Community Development Corp. in 1992, a nonprofit organization that focuses on revitalizing underserved neighborhoods. The same year he received his doctorate in ministry in Black church studies from the United Theological Seminary, in Trotwood, Ohio. Soaries then became a visiting professor at Princeton Theological Seminary and worked as an assistant professor at Kean University.

In 1996, Soaries founded The Harvest of Hope Family Services Network. The faith-based organization recruits and trains churches, agencies, organizations, and individuals to foster and adopt children. The organization has found foster homes for 1,440 children, permanent homes for more than 270 children, and reunited 60 children with their biological families. In 1997, he founded Corporate Community Connections Inc., a management consulting agency based in Somerset, New Jersey.

Soaries was chosen in 1999 by then-New Jersey Gov. Christine Todd Whitman, a Republican, as the 30th secretary of state, making him the first African American man to hold the position. While also serving as the unofficial advisor to the governor, Soaries founded V-FREE, a statewide youth violence prevention program. He held the position until 2002 and then worked as the commissioner for the U.S. Election Assistance Commission from 2004 to 2005. In 2005, Soaries launched the d[ebt]-free Financial Freedom Movement, teaching people how to break free from debt. Soaries has also worked as an independent director for Independence Realty Trust, Ocwen Financial Corp. and the Federal Home Loan Bank of New York. The Soaries Adult Residence at Somerset, named after him, opened in 2014. The facility offers independent living with supportive services for adults 55 and over in 63 apartments, and offers an additional 13 apartments for those over 62 and those with special needs.

After 30 years of service, Soaries retired as senior pastor in June 2021. He continues his role in his numerous foundations and community organizations and has authored three books: Say Yes to No Debt, 12 Steps to Financial Freedom, and Meditations for Financial Freedom (Volumes 1 and 2). Soaries lives in South Brunswick, New Jersey with his wife, Donna, and the couple have twin sons, Martin and Malcolm.