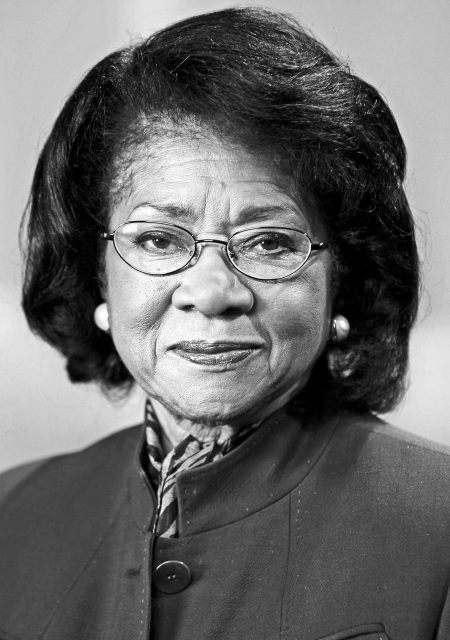 Award-winning broadcast journalist and author Belva Davis made history in 1966 when she was hired by San Francisco, California’s Channel 5, KPIX-TV, becoming the first female African American television news reporter on the West Coast.

Born Belvagene Melton on October 13, 1932 in Monroe, Louisiana, she was the oldest of five children born to John Melton, a sawmill worker, and Florence Howard Melton, a laundress. When she was eight years old her family moved to Oakland, California to live with relatives. John Melton worked as a carpenter for the Navy, and Florence Melton was hired by Southern Pacific Railroad to polish silver for SP’s dining cars. In the late 1940s the Melton family purchased a house in Berkeley. Melton was the first in her family to earn a high school diploma, graduating from Berkeley High School in 1951.

Although Melton considered college, the family’s finances forced her to get a job at the Oakland Naval Supply Center as a typist. On January 1, 1952, at age nineteen, she got married. Two children, Darolyn and Steven, were born to her and husband Frank Davis, but the marriage faltered.

In 1957 Davis accepted a freelance writing assignment, which led to a part-time position working for Jet, an African American weekly magazine.  Soon Davis found herself covering social news for African American newspapers in the Bay Area. The freelance assignments didn’t pay much to support her household as a single mother, but Davis had found her calling.

Davis moved into television in 1963 when she accepted a freelance assignment at station KTVU-TV in Oakland covering a beauty pageant for black women. In order to familiarize herself with television production and direction, Davis visited the library to study what she needed to know.

In 1966 Davis was among over 60 applicants for the job to replace co-anchor Nancy Reynolds on San Francisco’s CBS affiliate KPIX-TV. She was chosen for the job. At KPIX Davis met Bill Moore, the first African American cameraman at a major TV station in the Bay Area.  He became her second husband in 1967.

Davis eventually helped create and host All Together Now, one of America’s first public affairs programs spotlighting ethnic communities. In 1977, at San Francisco’s PBS affiliate KQED, Davis anchored A Closer Look, and then Evening Edition until 1981. Afterwards Davis worked as anchor at KRON-TV until 1999.

Among the several dozen awards Davis has received for contributions to journalism have been eight local Emmy Awards, lifetime achievement awards from the National Association of Black Journalists (NABJ) and from the American Women in Radio and Television, and in 1996 the Northern California Chapter of National Academy of Television Arts and Sciences’ highest lifetime achievement award, the Governor’s Award. Davis was inducted into the Bay Area Radio Hall of Fame in 2007

In 2010 Davis’s autobiography, Never in My Wildest Dreams: A Black Woman’s Life in Journalism, was published. Davis retired in 2012, and today she and her husband live on a ranch in Petaluma, California.