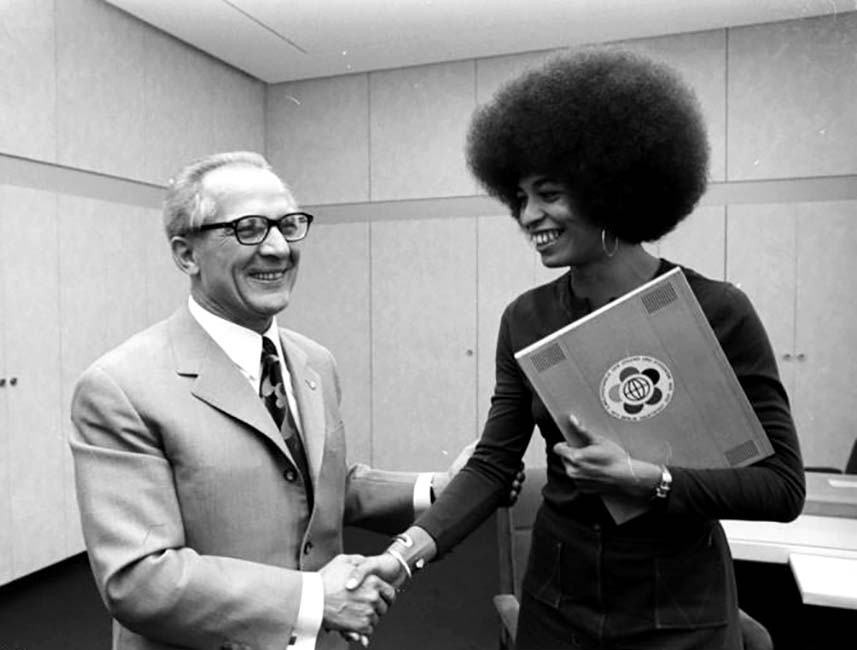 Angela Davis, activist, educator, and scholar, was born on January 26, 1944, in the “Dynamite Hill” area of Birmingham, Alabama.  The area received that name because so many African American homes in this middle class neighborhood had been bombed over the years by the Ku Klux Klan.  Her father, Frank Davis, was a service station owner and her mother, Sallye Davis, was an elementary school teacher.  Davis’s mother was also active in the National Association for the Advancement of Colored People (NAACP), when it was dangerous to be openly associated with the organization because of its civil rights activities.  As a teenager Davis moved to New York City with her mother, who was pursuing a master’s degree at New York University.  While there she attended Elizabeth Irwin High School, a school considered leftist because a number of its teachers were blacklisted during the McCarthy era for their earlier alleged Communist activities.

In 1961 Davis enrolled in Brandeis University in Waltham, Massachusetts. While at Brandeis, Davis also studied abroad for a year in France and returned to the U.S. to complete her studies, joining Phi Beta Kappa and earning her B.A. (magna cum laude) in 1965.  Even before her graduation, Davis, so moved by the deaths of the four girls killed in the bombing of Sixteenth Street Baptist Church in her hometown in 1963, that she decided to join the civil rights movement.  By 1967, however, Davis was influenced by Black Power advocates and joined the Student Nonviolent Coordinating Committee (SNCC) and then the Black Panther Party.  She also continued her education, earning an M.A. from the University of California at San Diego in 1968.  Davis moved further to the left in the same year when she became a member of the American Communist Party.

In 1969, Angela Davis was hired by the University of California at Los Angeles (UCLA) as an assistant professor of philosophy, but her involvement in the Communist Party led to her dismissal.  During the early 1970s, she also became active in the movement to improve prison conditions for inmates.  That work led to her campaign to release the “Soledad (Prison) Brothers.”  The Soledad Brothers were two African American prisoners and Black Panther Party members, George Jackson and W. L. Nolen, who were incarcerated in the late 1960s.

On August 7, 1970, Jonathan Jackson, the younger brother of George Jackson, attempted to free prisoners who were on trial in the Marin County Courthouse.  During this failed attempt, Superior Court Judge Harold Haley and three others, including Jonathan Jackson, were killed. Although Davis did not participate in the actual break-out attempt, she became a suspect when it was discovered that the guns used by Jackson were registered in her name.  Davis fled to avoid arrest and was placed on the FBI’s most wanted list. Law enforcement captured her several months later in New York.  During her high profile trial in 1972, Davis was acquitted on all charges.

The incident nonetheless generated an outcry against Davis. Ronald Reagan, then governor of California, Reagan campaigned to prevent her from teaching in the state university system.  Despite the governor’s objection, Davis became a lecturer in women’s and ethnic studies at San Francisco State University in 1977.

As a scholar, Davis has authored eleven books, including Angela Davis: An Autobiography in 1974; Women, Race, and Class in 1983; and Blues Legacies and Black Feminism: Gertrude “Ma” Rainey, Bessie Smith, and Billie Holiday in 1999.

In the political arena, Davis ran unsuccessfully in 1980 and 1984 on the Communist Party ticket for vice president of the United States.  Davis continues to be an activist and lecturer as Professor Emeritus of History of Consciousness and Feminist Studies at the University of California at Santa Cruz.