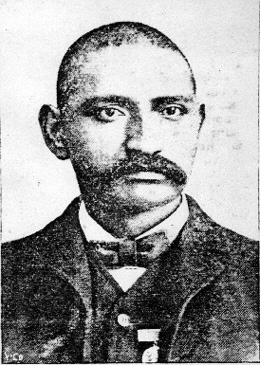 John Newington Conna was a pivotal figure in the early history and development of Washington State. Born enslaved near San Augustine, Texas in 1836, Conna was a free man by the time of the Civil War because he served in the 1st Louisiana Native Guards, an all-black Union Regiment between 1863 and 1865. Conna fought in three major engagements: the bloody siege at Port Hudson and battles at Milliken’s Bend and Tonica Bayou.

After his military discharge on May 4, 1865, Conna moved north to Hartford, Connecticut. There he married Mary L. Davis in 1870. In 1879, the Connas and their seven children moved to Kansas City, Kansas. In 1883, when the continental railroad reached the west coast, the Conna family became the first African Americans to travel by train to Tacoma, Washington, the western terminus. He purchased a 160 acre farm north of Tacoma which is now a part of Federal Way, Washington.

Shortly thereafter, Conna joined the Allen C. Mason real estate firm and soon became its leading broker but by 1890 he started his own real estate firm.  Conna also actively recruited African Americans from other parts of the country to migrate to the Pacific Northwest including coal miners who settled near Roslyn, Washington in the 1890s.

John Conna was politically active.  By the time Washington became a state in 1889, he was the titular leader of the black voting bloc in Tacoma as president of the John Brown Republican Club and the Washington State Protective League.  He was also a member of the local chapter of the Afro-American League, the predecessor to the National Association for the Advancement of Colored People (NAACP).  Due to his political influence he was selected Sergeant at Arms for the first Washington State Legislature in 1889.  While there he helped successfully lobby for Washington’s first Public Accommodation law. On December 24, 1889, John and Mary Conna donated 40 acres of land, which is now called the Conna addition, to the City of Tacoma.

John Conna caught the “gold fever” and at the age of 64 sailed for Alaska with his good friend Judge James Wickersham in 1900. He remained there long after most of the gold miners left Alaska.  By 1910 he had established a real estate, mining, and investment company and a second hand furniture store in Fairbanks, Alaska.  He also ran unsuccessfully for the Alaska Territorial Senate and for the Fairbanks city council as a Socialist. At the time of his death in 1921, Conna owned six rental houses in Fairbanks, Alaska and several shares of the Cripple Creek gold mine.  John Newington Conna died in Fairbanks, Alaska on October 11, 1921 at the age of 85.