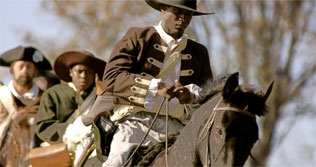 Titus Cornelius, also known as Titus Tye, was an escaped slave who fought with the British in the American Revolution, eventually rising to the rank of Colonel and leading the Black Brigade of guerrilla fighters.  Challenging Patriot forces primarily in New York and New Jersey, Tye became one of the most respected leaders of the Loyalist troops during the Revolution and a feared guerrilla commander to his opponents.

Born in 1753 as Titus, he was one of four slaves owned by Quaker John Corlies from Shrewsbury, Monmouth County, New Jersey. Although most Quakers taught their enslaved to read and write and freed them when the men and women reached the age of 21, Corlies kept Titus and his other slaves in bondage.  In November 1775, when Titus was 22 years old, Lord John Murray, the Earl of Dunmore, and royal governor of Virginia, issued a proclamation that not only declared martial law, but also offered freedom to those slaves and indentured servants who would join the royal forces. Titus along with 300 other enslaved people fled to join the British.  He assumed the name of Tye and joining the Royal Ethiopian Regiment. Here he quickly found respect and saw his first action at the Battle of Monmouth on June 28, 1778, during which he captured a rebel militia captain.

Encouraged by Loyalist New Jersey Royal Governor William Franklin, ironically the son of Benjamin Franklin, Tye soon became notorious for his ruthless guerrilla tactics during the Revolutionary War. His small mixed race band of guerrillas conducted raids and assassinations across New Jersey, with black ex-slaves under his command often targeting their former masters. In the summer of 1779, they conducted several raids on Shrewsbury in which they attacked and plundered Patriot homes, taking clothing, furniture, horses, and cattle. They often turned the plunder over to Loyalists who had previously suffered similar fates at the hand of Patriot forces.

During the winter of 1779, Tye was promoted to commander of a group of twenty-four black Loyalists known as the Black Brigade. Now known as Colonel Tye, he led these men on ruthless raids against the patriots.  Joined by a white Loyalist unit, the Queen’s Rangers, and other white Loyalist guerrilla bands, they freed numerous slaves, and helped to protect British-occupied New York City.

The twenty four African Americans of the Black Brigade were also involved in raids on rebel sympathizers during that winter. In 1780, Colonel Tye, led a serious of three actions against Patriot supporters into Monmouth County.  His raids continuing throughout the summer were aimed at demoralizing the rebels and depriving them of arms and manpower to resist the British. Tye’s tactics were so effective that most of the raids were successfully completed without the loss of any of his men.

Fear of Colonel Tye and the Black Brigade including the false idea that they were planning racial massacres, led Monmouth County Patriots  to organize the Association for Retaliation to protect themselves and intensify efforts to capture or kill Colonel Tye. On September 1, 1780, Tye led the Black Brigade and the Queen’s Rangers to Colt’s Neck, New Jersey in another attack on the prominent local county rebel leader, Captain Josiah Huddy. Known for his swift execution of Loyalists, Huddy was an important target for Tye’s forces.  During the short siege, Tye’s forces briefly captured Huddy but Patriot forces helped him escape.  During the battle Tye received a musket ball through his wrist.  The wound became infected and Tye died two days later on September 3, after the onset of tetanus and gangrene. He was approximately 27 at the time of his death.