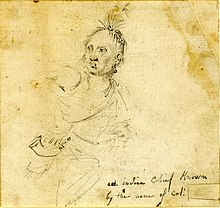 Joseph Louis Cook was an Afro-Iroquois leader and a Commissioned Officer in the Continental Army during the American Revolutionary War. Cook was born Nia-man-rigounant around the year 1737 in an area now known as Schuylerville, New York. His father was African, and his mother was an Abenaki Native American. During the French-Mohawk raid of Saratoga, in 1745, Nia-man-rigounant and his mother were captured. French officer Mr. Le Corn claimed the child as his prize of war, but after his mother pleaded with the Iroquois Chief Warriors, they demanded the child be returned to them as one of their own people. Nia-man-rigounant was released to his mother, and they returned with the tribe back to their village Kahnawake, south of Montreal, Canada. Nia-man-rigounant was formally adopted into the Mohawk tribe and raised alongside their children, learning their culture, native languages, and English from Jesuit Catholic Missionaries.

After the death of his mother, a Jesuit missionary persuaded young Nia-man-rigounant to come live with him, and work as his attendant. He took the name Joseph Lewis Cook, was taught the faith of the Roman Catholic Church, and learned French. He returned to live with the Mohawk in Kahnawake in his adult years and fought with the Mohawk Nation alongside the French against the British colonists during the French and Indian War (1754-1763). Cook was at the battle against the Braddock expedition in 1755, and at the Battle of Fort Oswego in 1756. He was wounded in a skirmish near Fort Ticonderoga later the same year. Cook was given his first official command in 1758 at the Battle of Carillion, and his unit was present in the 1760 Battle of Sainte-Foy (Battle of Quebec).

Cook married Marie-Charlotte when he returned home and lived in Caughnawaga Indian Village in New York. The increasing British population in his homeland caused him to move to Akwesasne, a Mohawk village in Quebec. Despite his new residence he sided with the 13 colonies during the American Revolutionary War. He offered his services to General George Washington in 1775 and was with Major General Benedict Arnold on his expedition into Quebec later that year. After a brief illness, Cook was with General Washington at Valley Forge, Pennsylvania in the winter of 1777 and sent in March of 1778 to destroy British ships at Niagara to prevent another Canadian invasion.

Cook received his commission of Lieutenant Colonel on June 15, 1779, from the Continental Congress. This was the highest rank ever awarded to an American Indian during the revolution, and the only known commission given to a man of African descent. He was present at the Battle of Johnstown in 1781, one of the last battles of the Revolutionary War. After the war he settled in Onondaga, New York, married Marguerite Thewanihattha, and the couple had several children together. Cook was responsible for several land negotiations for the Mohawk and Oneida people between 1792 and 1796.

Cook also served in the War of 1812. He was present at the Battle of Lundy’s Lane in October of 1814 where U.S. forces were defeated when they invaded Canada. He fell from his horse, and later died from his injuries. Cook was given a military salute at his funeral.