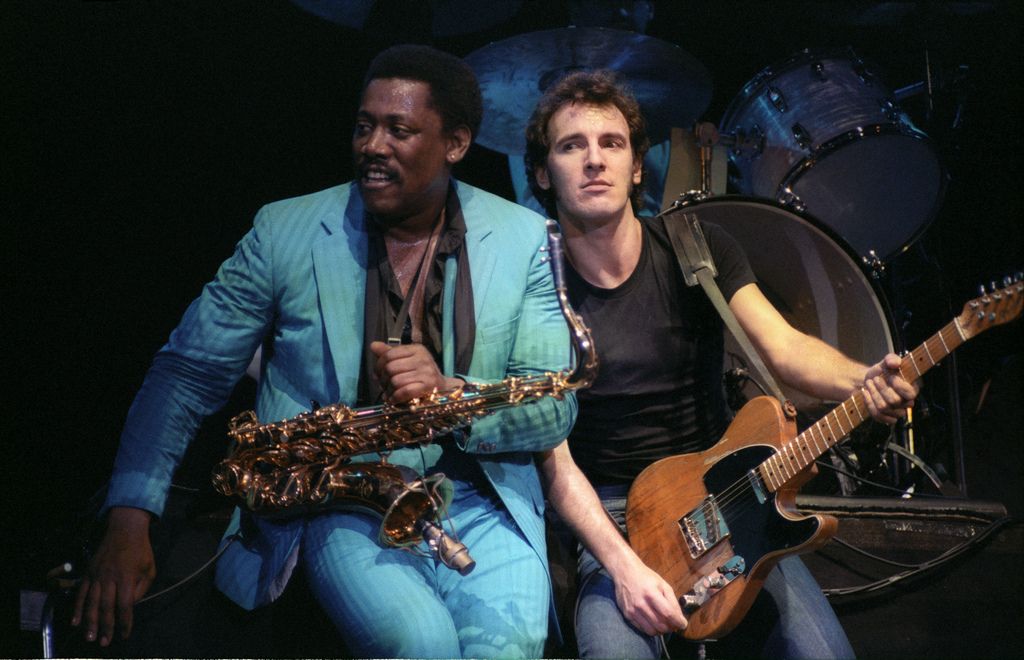 Hear a soundtrack specially chosen to enhance your learning about Clarence Clemons Jr. (1942-2011)

Legendary saxophonist, composer Clarence Clemons, a towering 6-foot-6, was born Clarence Anicholas Clemons Jr. on January 11, 1942, in Norfolk, Virginia, in the segregated Norfolk Community Hospital, to Clarence Anicholas “Nick” Clemons Jr., Sr., owner of The Clemons’ Seafood Market” on Liberty Street in the Berkley neighborhood, and Thelma Reid Clemons, a graduate of Norfolk Division of Virginia State College. He was the oldest of four children with siblings Geraldine, Daniel, and William Clemons. They grew up in South Norfolk (now Chesapeake, Virginia).

Clemons began saxophone lessons at the age of nine, and he sang in the Mt. Zion Baptist Church, Berkley. By the ninth grade at Crestwood Senior High School, he played Baritone Saxophone in the Concert, Marching, and Jazz Bands. Clemons graduated in 1960 and received music and football scholarships at Maryland State University (now the University of Maryland at Eastern Shore). There he majored in sociology while playing as a lineman on the football team. While in college, he joined his first professional band, the Vibrations in 1961. Approaching his junior year, in 1962, Clemons moved north to Newark, New Jersey, where he counseled at Janesburg Training School for Boys until 1970.

In 1972, Clemons began playing with the as-yet-unnamed The E Street Band which featured Bruce Springsteen as the lead singer. Clemmons was known with the band for his memorable solos on songs such as the 1984 hit, “Dancing in the Dark.”

In 1981, Clemons formed the Red Bank Rocker band and released albums and singles, including Rescue (1983), Hero (1985) and the 1986 duet “Let The Music Say It” on CBS Records along with singer Jackson Browne. That same year, the duo performed “You’re A Friend Of Mine,” which peaked at no. 18, remained charted for 19 weeks and reached the top 20 on the Billboard Hot 100. In addition, in 1985, Clemons was a special guest star in an episode of the NBC sitcom Diff’rent Strokes.

Clemons ended the decade in 1989 with the album A Night With Mr. C, which included two old cover songs, “Twistin’ The Night Away” and “Quarter to Three.” He next toured in Japan with Ringo Starr and His All-Starr Band.

During the next decade, 1990, Clemons produced the album Peacemaker. And 2002, he came out with Live in Asbury Park. Also, in 2004, he appeared in the third season of the HBO television series The Wire, in the episodes “Amsterdam” and “Moral Midgetry” as Roman, a community basketball coach. In 2010, Clemons released the album Live in Asbury Park, Vol. II.

Clemons has been married five times and has four sons, Charles, Christopher, Jarod, and Clarence III. However, in 2008, he married Victoria Clemons from Sweden. There were no children.

In 2011, Clemons was credited for his soulful sound on Lady Gaga’s mega-hit studio album Born This Way. Months later, Clarence Anicholas Clemons Jr. died from complications from a massive stroke in West Palm Beach, Florida, on June 18, 2011. He was 69.

In 2012 Clemons was posthumously inducted into the University of Maryland at Eastern Shore Athletics Hall of Fame, and in 2014, he was installed into the Rock and Roll Hall of Fame.