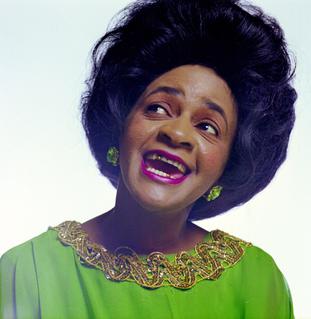 Clara Mae Ward, one of the most outstanding soloists and conductors in gospel history, was born in Philadelphia, Pennsylvania, on April 21, 1924, to George Ward, a handcrafter and ironworker from Anderson County, South Carolina, and Gertrude Mae Murphy Ward, a pianist and singer also from Anderson County. To be sure, it was Murphy Ward who founded the renowned The Ward Trio in 1931, and Clara Ward was the seven-year-old lead singer. Her musical genius was recognized during early childhood as she began piano studies when she was seven years old. At the age of 16, Ward’s first gospel song was recorded.

Ward, who had one older sister, Willarene, attended South Philadelphia High School in 1940, and in 1941 at 17, she left for romance to Richard Bowman. It was short-lived, and within a year, she was back singing.

In 1950 and 1952, Ward performed at New York City’s Carnegie Hall at the Negro Music Festival. Occasionally, she performed in nightclubs and 1957 at the Newport Jazz Festival in Newport, Rhode Island, during a gospel music forum. In 1962 she was one of the backup performers for the rhythm and blues song “Mashed Potato Time” by Dee Dee Sharp which was #1 on Billboard’s pop chart. The following year Ward was the Choral Director of Langston Hughes’ musical Tambourines to Glory, and was the principal singer in the Broadway’s Little Theatre on West 44th Street. In 1964 she performed for President Lyndon Johnson at his inaugural ball at the National Guard Armory in Washington, D.C. Three years later, in 1967, she led the Clara Ward Singers in a first of its kind performance at the Philadelphia Academy of Music.

Besides, Ward has widely performed gospel music throughout Australia, Japan, Europe, Indonesia, Thailand, and the United States as she led the six-member Clara Ward Singers who dominated the gospel charts in the 1960s and 1970s.

While Ward never remarried nor had children, she was a close friend of Reverend Clarence LaVaughn Franklin, Aretha Franklin’s father, whom the Ward Singers toured with throughout the 1950s.

Ward has composed and arranged more than 500 gospel scores. Among the most famous were “Surely God is Able,” “Move Up a Little Higher,” “The Day Is Past and Gone,” “Packin’ Up,” and “How I Got Over.” For her monumental impact in the world of gospel music, Ward has received numerous awards including being posthumously inducted in the Songwriters Hall of Fame in 1977. In 1998, the 32¢ Clara Ward Legends of American Music Series Gospel Singers stamp was issued by the United States Post Office.