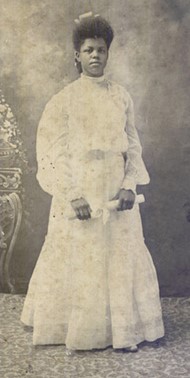 Clara Belle Drisdale, the first African American to graduate from New Mexico State University, was born to sharecroppers Isaac and Carrie Melinda Moppins Drisdale in LaGrange, Texas on October 29, 1885. She was first educated in a one room country school house near LaGrange but in 1901 she entered Prairie View Normal and Independent College (now Prairie View Agricultural and Mechanical University), in Prairie View, Texas. Drisdale graduated from the institution with a certificate in domestic arts, as its valedictorian in 1905. After graduation, she was the head of the institution’s sewing department before moving to El Paso, Texas. In 1917, Drisdale married Jasper Williams, a pharmacist in El Paso. Together they ran a drug store and became parents of three sons, Jasper, James, and Charles.

In 1924, the Williams family left Texas and moved to Las Cruces, New Mexico where they homesteaded 640 acres of land. Williams continued her education by taking extension and correspondence courses from the University of Chicago, but in 1928 she enrolled at the New Mexico College of Agriculture and Mechanic Arts (now New Mexico State University). While Williams was a student she was segregated from other students because of her race and often had to listen to lectures outside of classrooms and take notes while standing.

In 1937, at age 51, Williams became the first African American to graduate from New Mexico State University. She received a bachelor of arts in English but was not allowed to participate in her class’s graduation. Despite her humiliation, Williams continued her education at the university by taking twelve hours of graduate work. Her three sons also graduated from the university and all later became physicians.

After graduation, Williams taught at the Booker T. Washington School in the racially segregated Las Cruces school system for twenty-seven years before retiring and moving to Chicago in 1951 to join her sons who had opened a medical clinic. Her husband, Jasper had died in Las Cruces in 1946.

In 1961 New Mexico State University officials, recognizing the injustice toward their first black college graduate, began to make amends. That year the university named Williams family outstanding alumnae of the year. The university also named Williams Avenue, located on its campus, after the family. In 1969, she was named to the Educational Hall of Fame by the New Mexico Education Association. In 1980, 43 years after she graduated, Williams received an honorary law degree along with an apology from school officials for the racist treatment she endured while a student at New Mexico State University. In 2005, the university named its English building after Williams and the Clara Belle Williams Award Ceremony was further established in her honor.

Williams was also honored by the Chicago area Fine Arts Guild and the Order of Eastern Star-Eureka Grand Chapter named her the 1966 outstanding mother and businesswoman of the year.