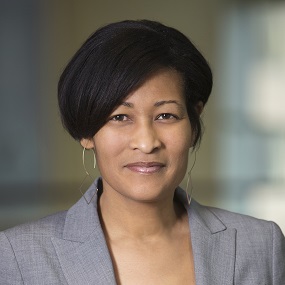 Cheryl D. Mills was the Counsel and Chief of Staff for Secretary of State Hillary Clinton from January 2009 until January 2013. She was also deputy White House counsel during the Clinton Administration 1993 to 1999.

Born on January 1, 1965, Mills grew up on U.S. Army posts in Germany, Belgium, and the U.S. as the daughter of a lieutenant colonel. She graduated from Eleanor Roosevelt High School in Greenbelt, Maryland. She obtained her bachelor’s degree in 1987 from the University of Virginia, graduating Phi Beta Kappa. At Stanford Law School, she was invited to join the Stanford Law Review editorial board. Then after graduation in 1990, she then joined the Washington D.C. law firm of Hogan & Hartson as an associate.

In 1992, Mills joined the presidential transition team for President Bill Clinton. After the 1993 inauguration, when she became associate White House counsel, her duties included oversight of compliance with campaign and conflict-of-interest rules. She rose to deputy White House counsel in 1997, supervising 35 other attorneys and staff members. In 1999, she was one of the attorneys who represented President Clinton in his impeachment trial before the U.S. Senate.

In her work at the State Department starting in 2009 when she managed foreign policy and operational priorities of the 20,000-person federal agency. She had a special responsibility for the Department’s interagency global hunger and food security initiative spanning 19 countries, as well as diplomacy and development efforts in Haiti.

In 2010, Mills received the University of Virginia Distinguished Alumna Award.

After Hillary Clinton’s departure from the State Department in 2013, Mills also left and then founded the BlackIvy Group, which develops commercial enterprises in Africa. BlackIvy Group has offices in Ghana, Tanzania, and Washington, D.C.

Mills has volunteered with D.C. Works, a non-profit supporting the academic and social development of inner-city students of color. She has served on the boards of the See Forever Foundation, the National Partnership for Women and Families, the Leadership Conference on Civil Rights Education Fund, the Jackie Robinson Foundation, and the Center for American Progress.

Mills is married to David Domenici, who operates a non-profit focused on reforming educational systems in juvenile correction facilities. Mills and her husband have twin children born in 2005.