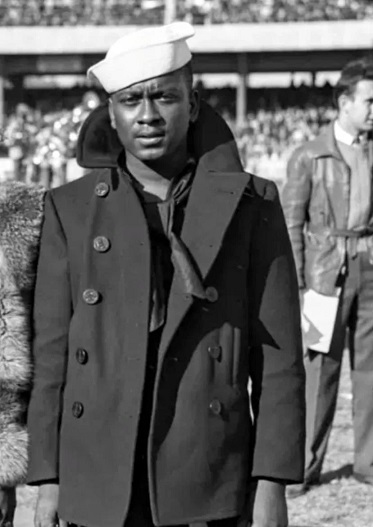 Petty Officer 1st Class Charles Jackson French was hailed as the “hero of the Solomons” and the “Human Tugboat” after a heroic rescue in the Pacific during World War II. Along with Doris “Dorie” Miller, who received the Navy Cross for valor during the attack on the fleet at Pearl Harbor on December 7, 1941, French was one of the most celebrated Black sailors during the war.

Charles French was born on September 25, 1919, in Foreman, Arkansas. After the death of his parents, he lived with his older sister, Viola, in Omaha, Nebraska. French enlisted in the U.S. Navy in 1937 and served four years. He received an honorable discharge on November 11, 1941, but re-enlisted after Pearl Harbor. French was assigned to the mess (kitchen) as an attendant. Along with stevedore and steward, mess attendant was one of the few occupations open to African American men in the navy.

On the night of September 5, 1942, French was on board the U.S.S. Gregory, a destroyer training ship, when it was sunk by the Japanese navy near the Solomon Islands. In the aftermath, French helped fifteen wounded survivors from the ship into a life raft. Fearing that the raft would drift toward the shore where Japanese troops were located, French towed the raft of wounded survivors toward a different island. He swam between six and eight hours in shark-infested water before being rescued by marines in a navy landing craft.

It was Ensign Robert N. Adrian, the only officer from the bridge of the Gregory to survive, who told an Associated Press reporter about the rescue. He also recounted the narrative on the NBC radio program, “It Happened in the Service.” Although Ensign Adrian received the Purple Heart for being wounded in action during the attack, French received a letter of commendation for “meritorious conduct in action” instead of a medal.

French made public appearances after the rescue, including attending a Creighton University football game with his sister in 1942. He was celebrated in the black press and was even the subject of a syndicated comic strip. French was also the only African American to appear on World War II patriotic trading cards issued by GUM, Inc.

After his military service, French suffered from alcoholism and depression. He died on November 7, 1956, in San Diego, California; he was only 37 years old. He was survived by his sister Viola.

Since 2018 there has been renewed interest in recognizing Charles French’s heroism more appropriately. In June 2021, he was honored by USA Swimming at the Olympics Swim Trials in Omaha. Later that year Nebraska’s three U.S. representatives, Don Bacon, Jeff Fortenberry, and Adrian Smith, co-sponsored H.R. 4168 to rename an Omaha post office for French. In addition, Rep. Bacon, a retired Air Force brigadier general, has petitioned the navy, asking for French to be considered for a posthumous medal of honor.