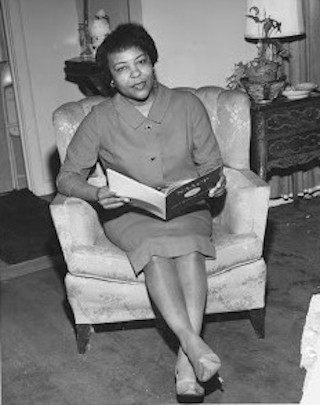 Civil rights activist Virna Mae Canson was born in Bridgeport, Oklahoma, to William A. and Eula Gross Dobson on June 10, 1921. Both of her parents were schoolteachers. She grew up in Lima, Oklahoma, a mostly African American town where her father served as mayor. Virna Dobson graduated from high school in 1938 and then studied home economics at Tuskegee Institute in Alabama.  There she met Clarence Canson who majored in tailoring at the Institute. They married in 1940 and returned to the bridegroom’s home in Sacramento, California.

During World War II, Virna Canson helped some African Americans in Sacramento gain employment at Safeway, Pacific Telephone, and other companies. She also served as a youth advisor to the local chapter of the National Association for the Advancement of Colored People (NAACP).

In the early 1950s, Canson organized biannual summits of the NAACP at the state Capitol. The summits led to the establishment of a Civil Rights division within the office of the California Attorney General.

In 1954, Canson became the treasurer-manager for the local NAACP Credit Union. She made housing finance and other loans available to minority families. Residential segregation was also of concern to her. She helped NAACP attorneys prepare lawsuits that challenged the discriminatory policies of the Sacramento Public Housing Authority. Several housing projects in the city were desegregated in the late 1950s at least in part because of her efforts.

After the Watts riots in Los Angeles in 1965, Canson was appointed a credit union specialist in the California State Office of Economic Opportunity. She went to a new service center in Watts to assist in the financial rebuilding of the district. The center was seen as a pilot program, but she persuaded community activists to expand the office and helped them write proposals for service centers in other low-income areas. Twenty-eight offices were added from Riverside County to San Francisco.

Canson left Watts in 1967 and joined the California Committee of Fair Practices as a state lobbyist, a position partly financed by the West Coast office of the NAACP. She pushed hard for economic and social legislation to protect low-income families.

When Leonard H. Carter, who directed the NAACP West Coast office, died in 1974, Canson was appointed to the post. She trained new managers of local NAACP chapters and campaigned for affirmative action policies to give people of color equal access to employment. She also helped start a national “Academic Olympics” for African American high school students.

Canson put correspondence, internal memoranda and other NAACP material into an archive and donated it to the Bancroft Library at the University of California at Berkeley in 1978. Six years later, the library added her civil rights story to its oral history collections. She retired from the NAACP in 1988.

Canson died at her home in Sacramento on April 14, 2003 at the age of 81. She was survived by her daughter and son.