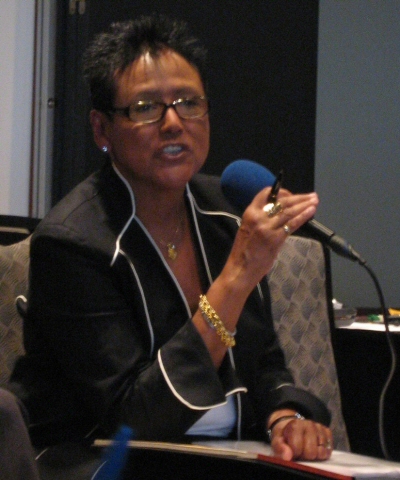 From 1974 to 1977, Elaine Brown was Chairwoman of the Black Panther Party.  As a Panther, Brown also ran twice for a position on the City Council of Oakland, California.  Since the 1970s she has been active in prison and education reform and juvenile justice.

Born in heavily black and impoverished North Philadelphia, Pennsylvania in 1943, Brown attended a predominantly white experimental elementary school where she studied ballet and classical piano.  Brown’s childhood was starkly divided between the comfort of her schooling and the realities of her home life.  Following high school Brown entered Temple University but left the campus for Los Angeles, California before the end of her first year.

In Los Angeles Brown worked at a well-paying Hollywood nightclub and developed a key relationship with writer Jay Kennedy – to whom Brown credits her early political education.  Brown began giving piano lessons in a Watts housing project in the summer of 1967.  Having lived in moderate affluence since moving to Los Angeles, her experiences in Watts served as a social and racial awakening, and soon Brown began writing for the radical Black Congress Newspaper, Harambee.  Brown’s first direct exposure to the Black Panther Party came through local appeals for the Huey Newton Legal Defense Fund.  Before the end of April 1968, following the assassination of Dr. Martin Luther King Jr., and the imprisonment of Panther leader Eldridge Cleaver, Brown attended her first Black Panther party meeting.

As a member of the Los Angeles chapter of the Black Panther Party Brown helped establish the party’s first Free Breakfast for Children program outside of Oakland.  By 1971 Brown became editor of the party paper, The Black Panther, and was soon elected the first female member of the Panther Central Committee.  At Party Chairman Huey Newton’s directive, Elaine Brown made her first run for Oakland City Council in 1973, in tandem with Bobby Seale’s mayoral bid.  Although neither Brown nor Seale were elected, both won solid support of a politically reawakened black Oakland population, expanding the Panther constituency.

In 1974 Huey Newton ousted Panther Party co-founder Bobby Seale from the party and two days later elevated Brown to the position of chairwoman.  When Newton fled to Cuba, Brown solidified her position as leader of the male-dominated party and worked to redefine the Panthers’ revolutionary program to include the aspirations of black women.

In 1975 Brown waged her second campaign for city council, this time receiving the endorsement of most of the local Democratic leaders, the United Farm Workers and the Teamsters union.  Brown was once again defeated, although she won 44 percent of the vote.  After Newton’s return from exile, however, and an increasing hostility within the party towards its female leadership, Brown left the party, and Oakland, in 1977.

Brown is the author of A Taste of Power and The Condemnation of Little B and is currently writing a biography of Jamil Al-Amin (formerly H. Rap Brown).  Brown also recorded two albums with Horace Tapscott and the Pan Afrikan Peoples Arkestra, Seize the Time (1969) and Elaine Brown (1973).  In 1996 Brown moved to Atlanta, Georgia where she established Field of Flowers, a nonprofit organization designed to build a model education center for impoverished children.  Brown also co-founded two other organizations, Mothers Advocating Juvenile Justice (1997) and the National Alliance for Radical Prison Reform (2002).  In March of 2007 Elaine Brown announced her candidacy for the Green Party nomination for President of the United States.