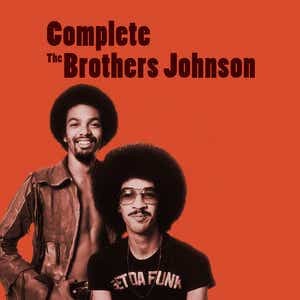 Classic Funk/ R&B band the Brothers Johnson comprised two biological brothers and bandmates, composer/ guitarist/ vocalist George “Lightnin’ Licks” Johnson, born on May 17, 1953, and composer/ bassist/ vocalist Louis E. “Thunder Thumbs” Johnson who was on April 13, 1955. They were both born in Los Angeles, California. The brothers were introduced to the guitar at ages five and three, respectively. Their other brother is Joseph “Tommy,” a percussionist, born on May 12, 1951. Their father, Joseph Johnson, was employed at North American Aviation where he built engines. There is no available information on their mother.

The ensemble started in 1967 when they were students in Jordan High School as the Johnson Three Plus One which included their cousin, guitarist Alex Weir, who was born in New Orleans, Louisiana. They played for high school proms, and in 1971 George and Louis toured with Billy Preston’s band throughout Europe. By 1973, the two brothers had composed the songs, “Music in My Life,” and “The Kids and Me,” for Preston. Eventually they wrote more than 250 songs while on the road.

The duet produced their debut album, Look Out For #1, which was released in 1976 and peaked at #9 on the U.S. R&B charts. That album included two songs that reach #1 on the R&B soul chart. The first, “I’ll Be Good to You,” was their greatest hit, selling over a million copies and peaking at #3 on the Billboard Hot 100. The second song, “Get the Funk Out Ma Face,” peaked at #4 on the R&B chart and stayed on the chart for eight weeks.

In 1977, the Brothers Johnson’s album, Right on Time peaked at #13 on the Billboard Hot 200. It maintained the #1 R&B spot for three weeks, thus making it to #13 pop and sold over a million copies. The following year, 1978, the album Blam!! peaked at #7 on the Billboard 200. It also reached #1 on the R&B/Soul chart. Their 1978 single, “Stomp!” peaked at #7. In that year, they were the recipients of a Grammy Award for Best R&B Instrumental Performance. The brothers also contributed music foundations for Michael Jackson’s Off the Wall album in 1979.

The album Light Up The Night released in 1980 reached #5 on the Billboard 200 and peaked at #46 on the “Top 100 LPs of 1980” list in Rolling Stone. It reached #1 in 1980 on the Hot Dance Music/Club Play chart. In 1981, the Brothers Johnson toured with Quincy Jones at Budokan Hall in Tokyo, Japan and were featured on the album Quincy Jones Live In Tokyo. The following year, 1982, the brothers went their separate ways because of creative differences but in 1984 the reunited briefly to release the album Out of Control in Yugoslavia.

Overall, the Brothers Johnson produced ten albums, including the last one in 1996 titled Brothers’ N’ Love with A & M Records. The ensemble was inducted into the Rock and Roll Hall of Fame in 2000.