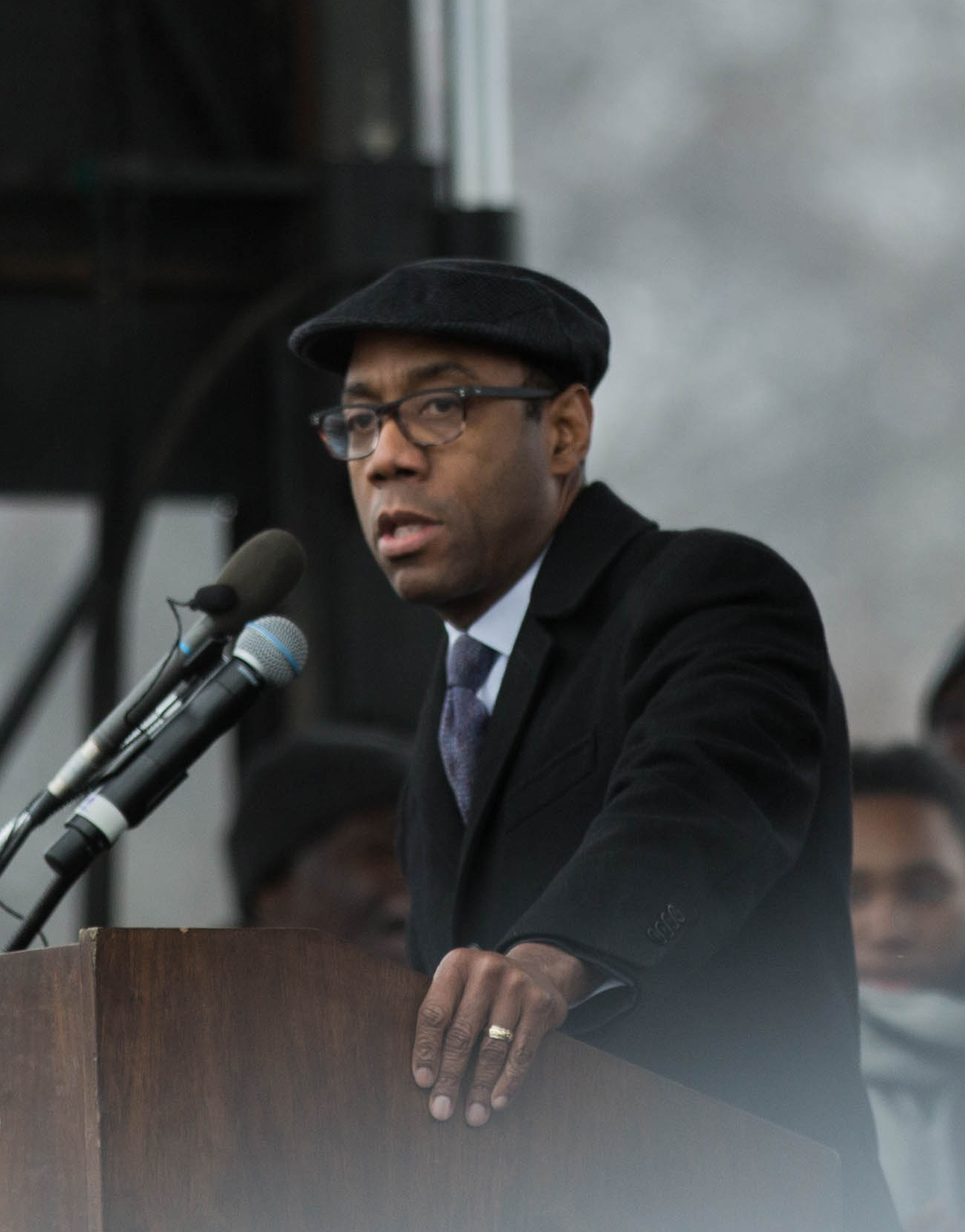 Cornell William Brooks at We Shall Not Be Moved Rally in Washington D.C., January 14, 2017
Courtesy Lorie Shaull (CC BY-SA 2.0)

Cornell William Brooks, currently the President of the National Association for the Advancement of Colored People (NAACP), was born in El Paso, Texas, in 1961. His family moved to Georgetown, South Carolina, just before he began junior high school. After graduating from Winyah High School in Georgetown, he earned a bachelor’s degree in political science from Jackson State University in Jackson, Mississippi in 1983. The following year, Brooks entered Boston (Massachusetts) University School of Theology. He was awarded the Oxnam-Leibman Fellowship for outstanding scholarship and received a Master of Divinity degree in 1987.

In 1990, Brooks earned a J.D. degree from Yale University Law School in New Haven, Connecticut. He then served a judicial clerkship with Chief Judge Sam J. Irvin III, on the United States Court of Appeals for the Fourth Circuit. In 1992, Brooks became executive director of the Fair Housing Council of Greater Washington, D.C.  While there he supervised a regional program of fair housing testing and public education in the District of Columbia and in the nearby Maryland and Virginia suburbs.

Brooks joined the United States Department of Justice in 1993.  While there he secured a major settlement for victims of housing discrimination and filed the Federal government’s first lawsuit alleging discriminatory housing against a nursing home.

In 2007, Brooks became president and chief executive officer of the New Jersey Institute for Social Justice. He focused the agency on criminal justice reform. The Institute persuaded employers to remove questions about criminal convictions on job applications thus giving ex-offenders far better chances for employment. Brooks also directed the Institute’s juvenile justice work that founded the first community court in New Jersey and reduced the state’s juvenile detention rates to historic lows. In 2011, he helped secure state laws that allowed released prisoners to re-enroll in Medicaid and made it possible for children of parents convicted of drug offenses to receive food stamps. Brooks also served on the board of the General Hospital in East Orange, New Jersey.

On May 16, 2014, the board of directors of the National Association for the Advancement of Colored People (NAACP) elected Brooks president of the NAACP. “Mr. Brooks is a pioneering lawyer and civil rights leader, who brings a wealth of knowledge and experience to the Association,” declared Roslyn M. Brock, chair of the NAACP board of directors. “We look forward to leveraging his legal prowess, vision, and leadership as we tackle the pressing civil rights issues of the 21st century.”

Cornell William Brooks, a member of Alpha Phi Alpha Fraternity, is married to Janice Broome Brooks and they have two sons.