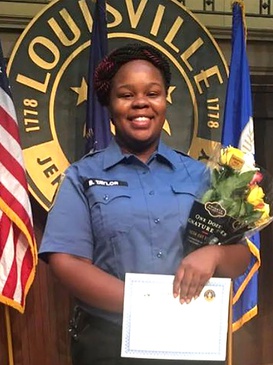 Breonna Taylor, one of the most prominent victims of police violence and misconduct in 2020, was born on June 5, 1993, in Grand Rapids, Michigan. She was raised by her mother, Tamika Palmer, and her boyfriend, Trory Herrod, in Louisville, Kentucky. Taylor  attended local schools and graduated from Western High School in Louisville in 2011. Taylor briefly attended the University of Kentucky and then became an Emergency Medical Technician for the city of Louisville. She worked for Jewish East Medical Center as a full-time Emergency Room Technician (ERT) and a Practicing Registered Nurse (PRN) for Norton Healthcare. Taylor desired to become a nurse, but her dreams were cut short when she was gunned down in her own home by police officers.

A narcotics investigation regarding a suspected drug dealer, Jamarcus Glover, led detectives to Taylor’s residence in the South End. Glover was a previous acquaintance, and she was under suspicion for using her home to receive mail, hide drugs, and stash monies earned from Glover’s drug sales. Taylor, who was 26 at the time, lived in a Springfield Drive apartment with her 27-year-old boyfriend, Kenneth Walker. Taylor and Walker were asleep in bed on the night of March 13, 2020, when they were awakened by a loud banging at the front door. Taylor called out, asking who was there, but heard no response. Walker, a licensed and registered gun owner, armed himself and headed towards the front door, when it suddenly came off its hinges.

Under a “no-knock” search warrant, Louisville Metro Police Department (LMPD) Sgt. Jonathan Mattingly, Detective Brett Hankison, and Officer Myles Cosgrove, all in plainclothes, stormed into the apartment. Kenneth Walker, thinking this was a home invasion robbery, fired one shot in self-defense. Sgt. Mattingly was hit in the leg, and in response the other officers opened fire, releasing more than twenty rounds into the apartment. Taylor was shot eight times and collapsed in the hallway of her apartment. She was pronounced dead at the scene. Walker was arrested for attempted homicide but was later released before all charges were dropped.

The subsequently-filed police report was an inaccurate account of the events that took place at Taylor’s apartment. It stated Taylor had no injuries and that there was no forced entry. All three officers involved in the shooting were placed on administrative reassignment pending the outcome of an investigation.

On May 5, 2020, Tamika Palmer filed a wrongful death lawsuit for the death of her daughter. On May 20 investigation findings were given to Kentucky Attorney General Daniel Cameron, while the FBI and US Attorney’s Office were also conducting their own investigations. LMPD Police Chief Steve Conrad retired on May 21 amid criticism of his handling of Taylor’s case.

The murder of George Floyd in Minneapolis on May 25 sparked additional outrage about police violence and sparked a summer of protests in Louisville, Minneapolis, and throughout the U.S.  Both Floyd’s and Taylor’s names were invoked by those who called for justice in protests around the world.

Louisville Mayor Greg Fischer indefinitely suspended the use of “no knock” warrants on May 29. In June, the LMPD announced that it would require all officers to wear body cameras and terminated Det. Hankison. In September, Hankison was charged with wanton endangerment for recklessly firing into an apartment adjacent to Breonna Taylor’s. During the same month, the city settled the wrongful death suit with Taylor’s mother for $12 million and also agreed to institute reforms to prevent deaths. To date, no additional officers have been charged, but in January 2021 Detectives Cosgrove and Joshua Jaynes, who prepared the search warrant, were terminated. In April 2021, Kentucky passed a law that partially banned no-knock warrants.