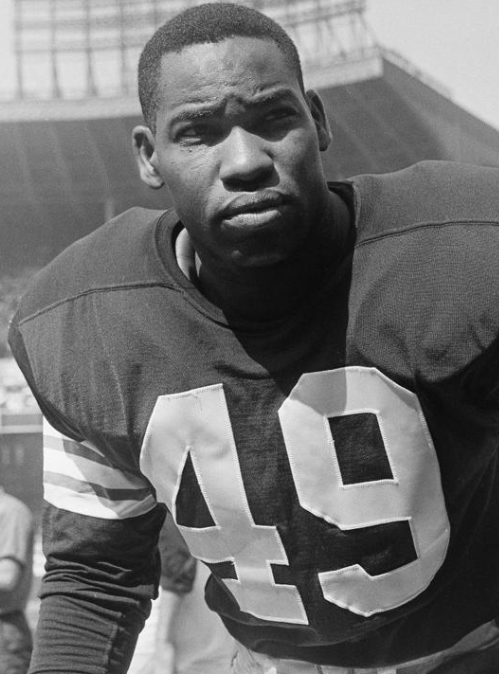 Bobby Mitchell was a professional football player in the National Football League. In 1962, after three seasons with the Cleveland Browns, Mitchell became the first African American to play for the Washington Redskins, the last team in the league to integrate its roster.

Robert Cornelius Mitchell was born in Hot Springs, Arkansas, on June 6, 1935, one of eight children of the Reverend Albert and Avis Mitchell. He attended Langston High School in Hot Springs where he played football, baseball, basketball, and track. He then enrolled at the University of Illinois on a football scholarship.

In 1958 Mitchell was drafted by the Cleveland Browns to play halfback. He became a star with the team, receiving the first of his four career Pro Bowl selections in 1960. In four seasons with the Browns, he scored 38 touchdowns and accumulated 5,917 total yards in rushing, pass receiving, and punt and kickoff returns.

In 1962 Mitchell was traded to the Washington Redskins, the only remaining team in the league with an all-white roster. The federal government was pressuring team owner George Marshall to integrate, threatening to block the team’s use of the publicly owned D.C. Stadium if he did not. Washington was then the southernmost franchise in the league, and its games were broadcast on TV and radio through the South. Marshall, a segregationist, believed fans would abandon the team if it had Black players. He nevertheless gave in to the government’s demands and signed Mitchell and two other Black players, John Nisby and Ron Hatcher.

In Mitchell’s first game with Washington, he scored three touchdowns, two on pass plays and another on a 92-yard kickoff return. In his first season with the team, he led the league in catches and receiving yards, and he finished third in touchdowns. He played another six seasons in Washington before retiring in 1968. Mitchell was inducted into the Football Hall of Fame in 1983.

Later in life, Mitchell admitted his first few years in Washington were difficult for his family. Some restaurants refused them service, and while on the field he heard racial taunts from fans. Mitchell also said some friendly sportswriters admitted they were instructed not to write feature stories about him or vote for him for awards. Things began to improve as more Black players were added to the team throughout the 1960s, he said.

After retiring as a player, Mitchell moved to the front office and served as an executive from 1969 to 2003. He first served as a talent scout, but in time moved to the position of assistant general manager. Mitchell aspired to be named the sport’s first African American general manager, but he was passed over multiple times in favor of white candidates, and he retired from the organization in 2003 with some bitterness. In June 2020, the Washington team announced Mitchell’s number 49 would be retired.

Mitchell and his wife, Gwen, raised two children, Robert Jr. and Terri. He was involved with many civic organizations, including the United Negro College Fund, National Association for the Advancement of Colored People (NAACP), and Boys Club of Washington. Bobby Mitchell died on April 5, 2020, at the age of 84.