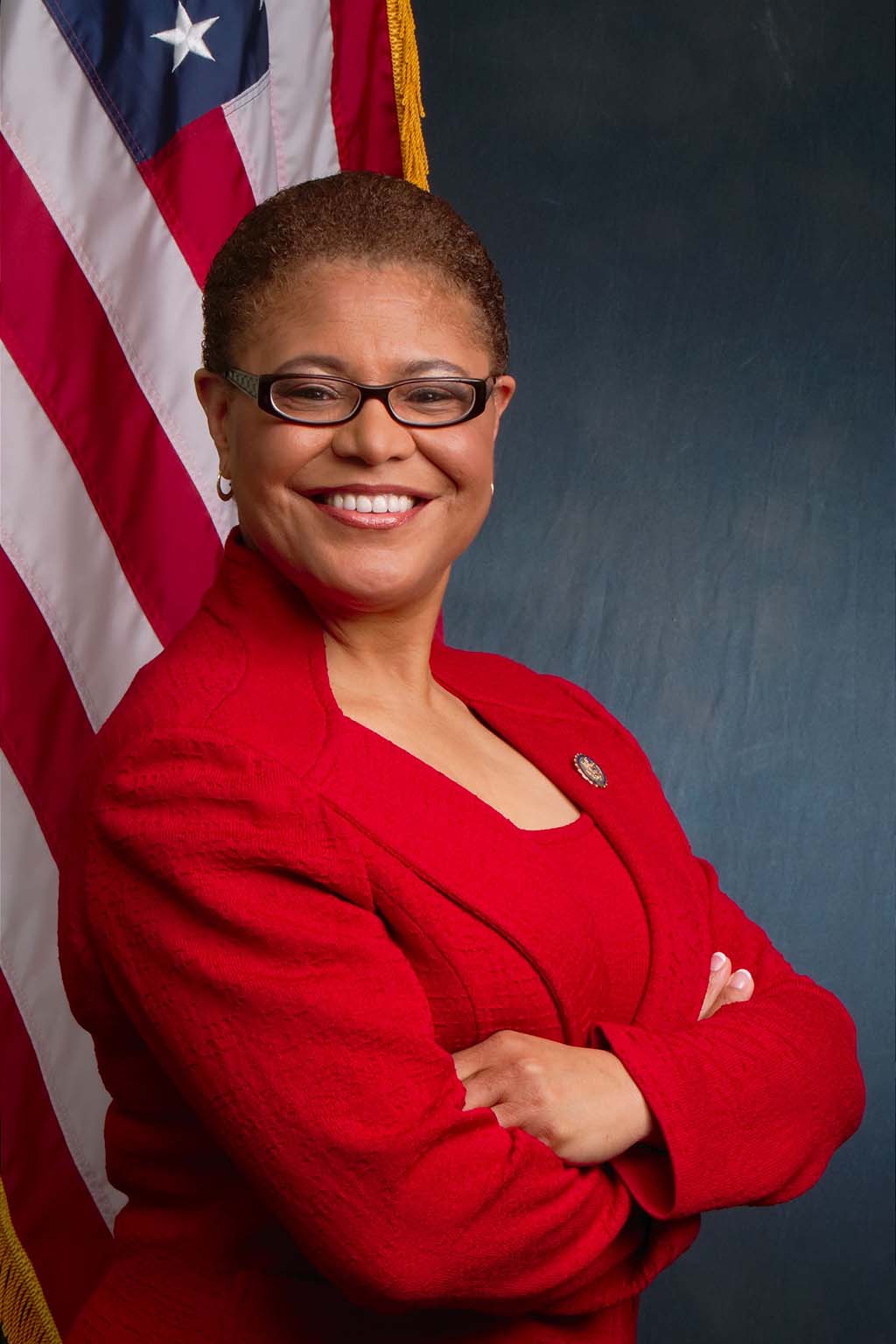 Karen Bass made history on December 11, 2022 when she was sworn in by Vice President Kamala Harris as the first woman and second Black person (after Tom Bradley) to be mayor of Los Angeles, California, the second largest city in the United States.  Before her election, Bass was a member of Congress, having been elected to the United States House of Representatives in 2011 following a successful six-year post as a California Assembly member.

As the Representative of California’s 33rd Congressional District, Bass led initiatives specifically designed to reform the foster care system and U.S.-African relations. Prior to her congressional election, Bass made history on February 28, 2008, when she was selected California Assembly’s 67th Speaker and became the first African American woman in U.S. history to hold this prestigious position in any state government.

Born on October 3, 1953 to Dewitt and Wilhelmina Bass, Karen Bass grew up in the Venice-Fairfax district of Los Angeles. After graduating from Hamilton High School, Bass attended the newly constructed California State University branch at Dominguez Hills and earned a Bachelor’s degree in Health Sciences. Bass then studied to become a Physician’s Assistant at the University of Southern California’s School of Medicine, and later earned a position as a Physician’s Assistant, nurse, and instructor at the university’s medical center.

Bass came of age during an era of widespread civil rights protests across the nation and recalled as a child witnessing many of the protests on television. There she found inspiration in movements for equality. Bass’ daily encounters with underserved patrons especially during the crack epidemic in South Central Los Angeles in the late 1980s and 1990s, prompted her to found an organization known as the Community Coalition after the Los Angeles Riots in 1992. This non-profit organization is dedicated to improving the lives of South Los Angeles residents by eliminating liquor stores and low-rent motels from the neighborhoods, removing cigarette and alcohol billboards near public schools, and increasing the number of laundromats and grocery stores available to residents.

Bass’ career in politics began in 2005 when she won a seat in California’s State Assembly. As Representative of Los Angeles’ 47th district, Bass excelled in the Assembly, becoming Majority Whip during her first term and Majority Floor Leader during her second term. Although Bass experienced tragedy in 2006 when her daughter, Emilia Bass-Lechuga and son-in-law, Michael Wright, died in a car accident, she remained a powerful and influential figure in the Assembly.  Bass was married to Jesus Lechuga in 1980 but the couple divorced in 1986.  Despite the divorce, Bass and Lechuga jointly raised Bass’s four stepchildren: Scythia, Omar, Yvette, and Ollin.

While a member of Congress, Bass chaired the Congressional Black Caucus from 2019 to 2021.  While a U.S. Representative she made a reputation as an advocate of foster care reform, an issue that she supported in the California state legislature. Bass, for example, helped found the Congressional Caucus on Foster Youth, which works to both assess and reform child welfare across the United States. Reminiscent of an earlier generation of African American activists, Bass’ congressional agenda supported U.S.-Africa reform measures. As a member of the Subcommittee on Africa, Bass supported the approval of the African Growth and Opportunities Act (AGOA), which helped foster economic growth in African nations.

Bass has made history in her career at the state and national level and now as the mayor of a city of 3.8 million where African Americans comprise only 8% of the total population.