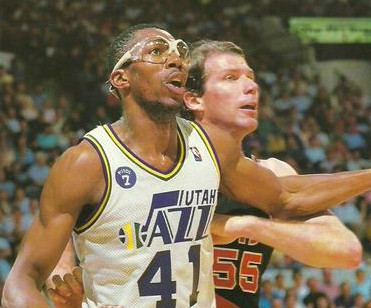 Thurl Lee Bailey is a retired American professional basketball player who played in the National Basketball Association (NBA) from 1983 to 1999 with the Utah Jazz and Minnesota Timberwolves. Bailey has also been a broadcast analyst for the Utah Jazz and the University of Utah and an inspirational speaker, singer, songwriter, and film actor.

Bailey was born on April 7, 1961, in Washington D.C., but grew up in Bladensburg, Maryland, a suburb of Washington. He attended North Carolina State University where he played for the N.C. State Wolfpack Basketball team. Bailey was a part of the Wolfpack team that played in the 1983 NCAA Championship where they defeated the University of Houston Cougars led by future NBA stars Hakeem Olajuwon and Clyde Drexler.

The Utah Jazz chose Bailey as the seventh pick in the first round of the 1983 NBA draft by the Utah Jazz. Bailey would play with the Jazz until 1991 when he was traded to the Minnesota Timberwolves, along with a 1992 second-round draft pick. Bailey played for the Timberwolves for three seasons until 1994 when he left the NBA and played for the Greek professional basketball club Panionios B.C. in the Greek League for the 1994–1995 season. From 1995 to 1998 he played in the Italian League for Polti Cantu (1995–97) and Stefanel Milano (1997–98). He was the Italian League’s 1998 All-Star Games Most Valuable Player before returning to the Jazz as a free agent in 1999. Bailey retired from the NBA after the 1998–1999 NBA season.

Bailey began his involvement in community service during his basketball career. He directed basketball camps for youth beginning in 1984. His camps mostly focus on students with serious illnesses or disadvantaged backgrounds. He has worked with various charities which include Make-A-Wish, D.A.R.E, and the Happy Factory. Bailey’s record of service in the community generated numerous awards, including the NBA’s prestigious Kennedy Community Award, the Utah Association for Gifted Children’s Community Service Award, Sigma Gamma Chi Fraternity’s Exemplary Manhood Award, and the Great Salt Lake Council of the Boy Scouts of America’s American Champion Award.

After Bailey’s NBA career ended, he became a motivational speaker and broadcast analyst for the Utah Jazz and the University of Utah. Bailey is also an actor and songwriter; his music includes uplifting songs as well a fusion of R&B and Nu Soul. Bailey released music albums which include Faith in Your Heart (1998), The Gift of Christmas (2001), and I’m Not the Same (2002). Bailey also acted films including Thurl: Forward with New Power (1994), The Luck of the Irish (2001), The Single Ward (2002), David and Goliath (2005), Church Ball (2006), Herbert Holiday (2007), Running with the Pack (2013), and an episode of ESPN’s 30 for 30 (2013). Bailey is also chairman of Big T Productions, Fertile Earth, and Four-leaf Films.

Thurl Bailey is a father of six children. He and his wife, Sindi, live in Salt Lake City, Utah, with their three children. Bailey had a daughter with his college sweetheart and two sons from his first marriage. Bailey was raised as a Baptist, but while playing basketball in Italy he decided to join The Church of Jesus Christ of Latter-day Saints where he was baptized by his father-in-law on December 31, 1995.