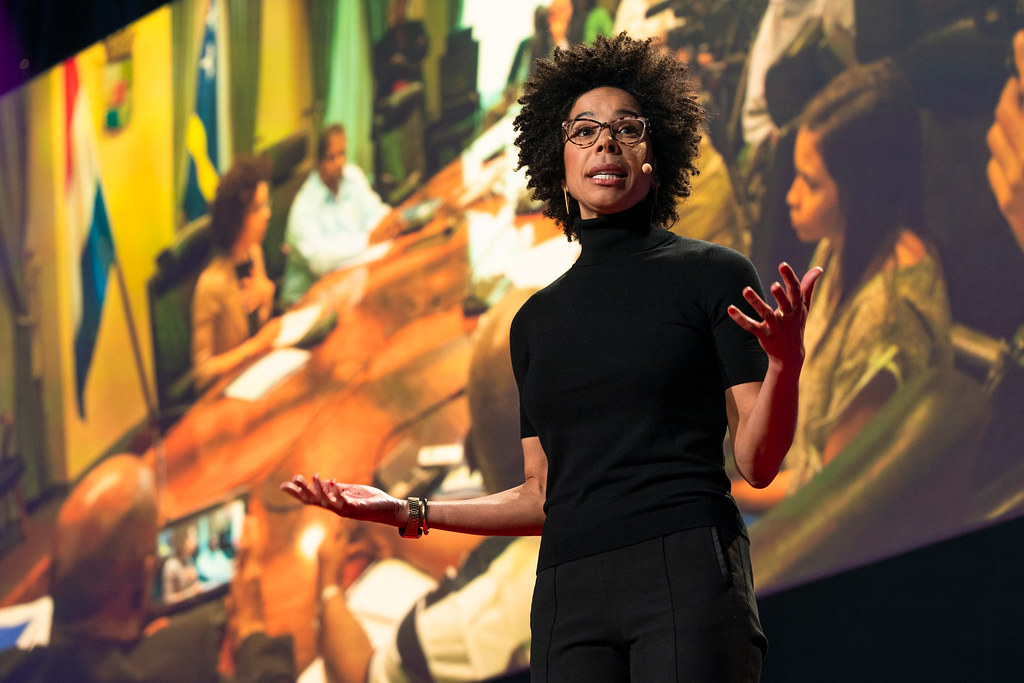 Ayana Elizabeth Johnson
This entry is sponsored by Phylisha Agbor and dedicated to her granddaughter, Anastasis “Adaobi” Agbor, for her desire to pursue a career in environmental science.

Ayana Elizabeth Johnson is a marine biologist, environmental strategist, and policy expert. Born on August 23, 1980 to a teacher and an architect, Johnson was raised in Brooklyn, New York.

Johnson earned a BA in Environmental Science and Public Policy from Harvard University in 2002. She then earned a PhD in marine biology from Scripps Institution of Oceanography in San Diego in 2011. Johnson’s dissertation focused on the bionomics and social and economic factors of maintaining coral reefs in a sustainable manner. For this research, Johnson was awarded an American Association of University Women Fellowship for 2010-11, a Switzer Environmental Fellowship, a National Science Foundation (NSF) Graduate Research Fellowship, and an NSF Integrative Graduate Education and Research Traineeship (IGERT) Fellowship. In 2012, she won the first Rare/National Geographic Solutions Search contest for the fish trap that she invented for the purpose of reducing bycatch (unwanted fish and other marine creatures caught during commercial fishing for a different species).

Before entering graduate school, Johnson held a policy position in the Environmental Protection Agency (EPA) and upon completion of her PhD, she held a policy position in the National Oceanic and Atmospheric Administration (NOAA). She went on to occupy the role of Director of Science and Solutions at the Waitt Foundation in Washington, D.C., where she worked to fund ocean conservation projects.

Johnson led the Caribbean’s first ever successful ocean zoning project by providing policy support, scientific assistance, and maps to the island of Barbuda through the Blue Halo Initiative, which she co-founded in 2013. This zoning project resulted in the protection of the coastal waters of Barbuda. The Blue Halo Initiative was established for the purpose of partnering with governments and local communities in the Caribbean to enact ocean conservation plans.

Following the success of this first successful zoning project, Johnson spearheaded the growth of this initiative, successfully instituting it in Curacao and Montserrat through partnerships with stakeholders and governments. She is the founder and president of a consulting firm, Ayana Elizabeth Consulting, which works toward the advancement of ocean sustainability and conservation measures that center social justice. She also founded an ocean policy think tank called Urban Ocean Lab which works to develop ocean policy solutions for coastal cities.

Johnson was among the inaugural members of the TED Residency program and an Aspen Institute Scholar in 2016. She works as an Adjunct Professor of Environmental Studies at New York University, a National Geographic blogger, volunteer co-director of partnerships for the March for Science, and is an independent consultant for climate policy issues and ocean conservation working with non-profits through her consulting firm. Her work has been featured in Nature magazine, The New York Times, Scientific American, and The Atlantic.

In her spare time, Johnson is a dance party organizer and jazz singer.