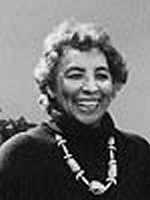 Hannah Diggs was born in Winston-Salem, North Carolina, on November 1, 1923.  Several of her relatives were teachers, and her parents instilled in her a love of reading and an appreciation for education.  She became the valedictorian of her high school class before enrolling at St. Augustine College in Raleigh, North Carolina.  She met Charles Atkins in college, and they married in 1943, two days before she graduated with a degree in education.

The couple moved to Chicago where she taught French in high school while her husband attended medical school.  She also earned a second bachelor’s degree, from the University of Chicago, in library science.  In 1951 the Atkinses moved to Oklahoma City where Dr. Atkins opened a psychiatric practice and she became a reference librarian.  Martin Luther King’s assassination in 1968 prompted her to get involved in politics.  That November, Atkins became the first African American woman elected to the Oklahoma state legislature; she served six two-year terms, from 1968 to 1980.

As a legislator, Atkins advocated increased governmental support for education and mental health facilities.  In 1973 she became the Oklahoma legislature’s first female committee chairperson when she was chosen to lead the Public and Mental Health Committee.  A staunch Democrat and an ardent feminist, the quiet, dignified Atkins became known for befriending those legislators who disagreed with her.  In 1987 Republican governor Henry Bellmon appointed her Oklahoma Secretary of State, and she served in that position until 1991.  In 1989 she received a Master of Public Administration degree from the University of Oklahoma.  She taught political science courses periodically at several universities.  Her public papers are archived at Oklahoma State University.

Hannah Diggs Atkins died of cancer on June 17, 2010 and is buried in Oklahoma City.