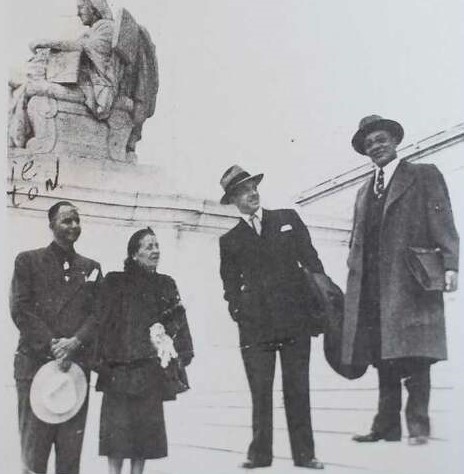 Willie Melton and Arizona Fleming Next To Attorneys J. Edwin Smith and James Nabritt on Steps of US Supreme Court Building 1953 (Veronica Harris)

Arizona Fleming was a small business owner who became part of the Civil Rights Movement in Fort Bend County, Texas. Fleming was born in Richmond, Texas on March 23, 1884, to Laura and Beauregard Fleming. Not much is known about her life. After attending segregated schools in her youth, Fleming attended the all-black Guadalupe College in Seguin, Texas, while working as a bookkeeper at the Seagul Laundry. It is unknown if she graduated or what she studied at the college.

Fleming returned to Richmond after college, and became a well-known seamstress at a local business. She worked her way from seamstress, to secretary, then manager, and finally the sole proprietor of the business. Along with several others, including future company president Andrew Jackson, Fleming co-founded the Fort Bend Undertaking Company in 1927. This business was responsible for handling all African American deaths in Fort Bend, and the surrounding counties.

During the Reconstruction era, African Americans in Fort Bend County could vote, and hold office. After the Civil War, the balance of power shifted between two competing factions, The Jaybirds, and the Woodpeckers. The Caucasian-led Jaybird Democratic Association represented the 2,007 whites in Fort Bend County, and the African American-led Woodpeckers represented the 5,510 black people in the county. By 1890, the Jaybirds were in control of the elections through the white-only Democratic primaries, and excluded the Hispanics, Jews and African Americans from voting.

In 1950, Willie Melton, a local Fort Bend black farmer, attempted to participate in the primaries as a candidate. Melton employed NAACP lawyer William J. Durham to inform the Jaybirds of his intentions. Melton also sought other names to attach to a lawsuit challenging voter discrimination by race in the county and state. Arizona Fleming joined the lawsuit as a plaintiff and devoted much of her finances to the case.

The Fort Bend Civic Club was founded to promote the lawsuit and Fleming became its first secretary. Going from house to house, Fleming was able to register 400 out of 550 eligible voters. The Jaybird Democratic Association initially won the case but the Civic Club with support of the NAACP, appealed and the case went to the U.S. Supreme Court. On May 4, 1953, the Court ruled in favor of Melton and the other plaintiffs and in the process, guaranteed for the first time since 1890, the right to vote for the disenfranchised people of Fort Bend County.

Fleming married F.A. Hicks on October 21, 1903, and Robert Simmons on January 10, 1912. Neither union produced any children. Fleming continued her work with the Civil Rights movement until her death on January 18, 1976, at age 91, in Richmond, Texas. She is buried in the Mount Caramel Cemetery. An elementary school in the Fort Bend district was renamed after Fleming in 1994, and in 2009 a historical marker was erected in a local town to commemorate the historic lawsuit that changed the voting rights for blacks in Fort Bend County.