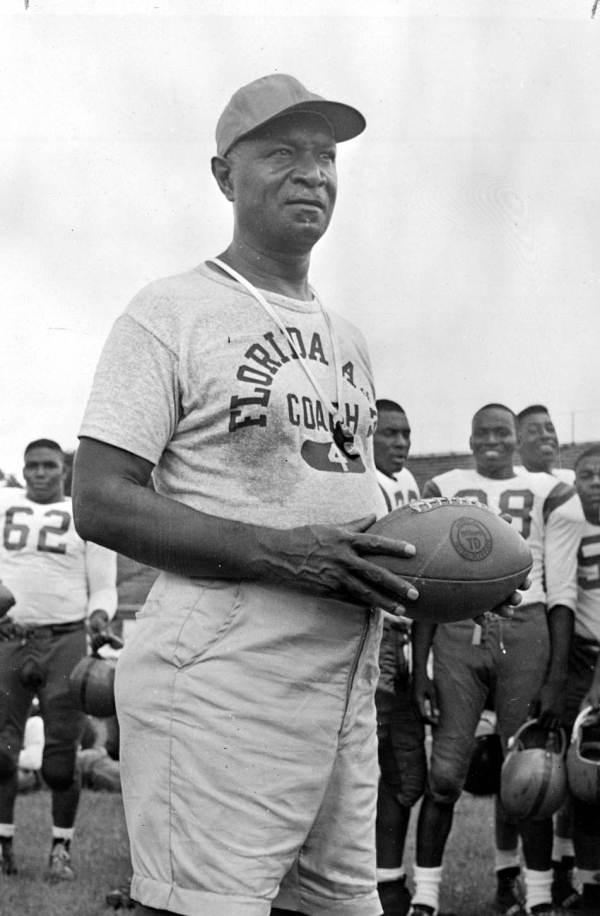 Alonzo Smith “Jake” Gaither, football coach, was born April 11, 1903 in Dayton, Tennessee to teacher Florence Kyle Gaither and AME minister Jefferson Davis Gaither. Gaither attended Knoxville College, Knoxville, Tennessee in 1919 as a high school freshman and graduated with a B.A. in 1927. During his years at Knoxville, he played football and was an All-Conference left end as well as a champion debater, earning him the moniker “the Stormy Petrel.” Dormitory mates also bestowed the nickname “Jake.”

In 1927, Gaither coached at Henderson Institute, Henderson, North Carolina where he won state championships in football, basketball, and track, and at St. Paul’s Normal School, Lawrenceville, Virginia where he coached from 1935 to 1937. Beginning in 1931, Gaither attended Sam Willaman football coaching clinics at Ohio State University (OSU) and met William M. “Big Bill” Bell. Upon graduating with an OSU Physical Education M.A. in 1937, Gaither was hired as an assistant coach at Florida A&M College for Negroes in Tallahassee, Florida by Bell, who was the head football coach.

Gaither famously wanted his players to be “mobile, agile, and hostile.” He held annual clinics that included Paul “Bear” Bryant, Woody Hayes, and Adolph Rupp as speakers. In 1963, Gaither introduced the Split-T formation and authored the book The Split-Line T, which many colleges quickly copied.

In 1969, FAMU beat the University of Tampa before 47,000 spectators. This was first time an HBCU played a predominantly white football team in the South. Gaither retired a few weeks later with overall status showing he won 84% of his games, had no losing season, and garnered a overall record of 204–36–4, one of the best in college football. The Gaither era saw FAMU win eight Black collegiate football national championships and of his athletes, 36 were All-Americans. Forty-two of his former players went into the National Football League (NFL) including notably Dallas Cowboy and 1964 Olympian Bob “Bullet” Hayes, Chicago Bear Willie Galimore, and Cincinnati Bengal Ken Riley.

Admitted into the Tallahassee Quarterback Club in 1952, he won the Southern Intercollegiate Athletic Conference Coach of the Decade Award (1960); and Coach of the Year for the Associated Press (1961), American Football Coaches Association Award (1962), and the National Association of Intercollegiate Athletics Award (1969). He was the first African American elected to the Orange Bowl Committee (1970). In 1975, he entered the National Football Foundation’s College Hall of Fame and won the Amos Alonzo Stagg and Walter Camp Awards.

In 1970, US President Richard Nixon named Gaither to the Advisory Conference on Physical Fitness & Sports. Since 1978, the Jake Gaither Trophy has been awarded to the best Black collegiate football player. In Tallahassee, a playground, public golf course, community center, street, south-side neighborhood, and FAMU gymnasium are named in his honor. A historic marker was installed in 2015 at his College Terrace home, which was placed on the National Register in 2016 by the National Park Service.

Sadie Mae Robinson, an English professor, married Gaither in 1931. “Jake” Gaither died in Tallahassee on February 18, 1994 at the age of 90.