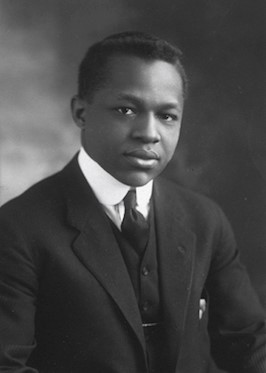 Alexander Jackson’s early education began at the segregated Lincoln School in Englewood. He graduated from the city’s public schools in 1905 when he was 14. Afterward, he studied at the prestigious preparatory boarding school, Phillips Academy, in Andover, Massachusetts. Jackson finished in 1910 and was selected to present the commencement speech. He enrolled in Harvard College in Cambridge, where he majored in sociology and English literature and received a Bachelor of Arts in 1914. At Harvard, Jackson lettered in track and field and was also selected as the class keynote commencement speaker.

The same year he graduated from Harvard, Jackson married Charlotte E. Walker. They moved to Chicago in 1915 when he became the Executive Secretary of the Wabash Avenue Young Men’s Christian Association (YMCA), the city’s major private social and educational center. The Wabash YMCA served as a welcome center for newcomers to Chicago’s Black neighborhoods during the Great Migration.

In 1916, Jackson, along with Dr. Carter G. Woodson, whom he had met during his undergraduate years at Harvard, William B. Hartgrove, George Cleveland Hall, and James E. Stamps, founded the Association for the Study of Negro Life and History, now Association for the Study of African American Life and History (ASALH). The Association brought together professional scholars and lay historians to research and write African American history. It created the Journal of Negro History, now the Journal of African American History. Woodson later founded Negro History Week in 1926, which became Black History Month. In addition to being a founder, Jackson also served on its first executive council.

Jackson returned to Chicago, and from 1921 to 1924, he was the assistant to the publisher of the Chicago Defender, at the time the largest African-American-owned newspaper in the nation. In 1925, he became the paper’s general manager. These duties overlapped with his position as the president of the trustee’s board of Provident Hospital and Training School, the first African American-owned and operated hospital in the United States, where he remained until 1936.