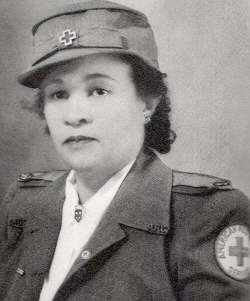 In 1938 Frances Mary Albrier became the first woman elected to the Alameda County Democratic Central Committee.  She also founded the East Bay Women’s Welfare Club whose goal was to get black teachers hired in the Berkeley schools.  This campaign saw success with the hiring of Ruth Acty in 1943. Albrier’s political involvement was driven by the reality that African Americans were “taxpayers without any representation in the city government or the schools of Berkeley.  That was the message I wanted to get over to them.”   In 1942 Frances Mary Albrier challenged racial and gender barriers in wartime Kaiser Shipyards in Richmond.  She completed a welding course with twice the required hours because “I felt I had to be better because I was a black woman,” passed the welder’s test “with flying colors,” but her application was rejected by the Boilermakers Union in the shipyards because Kaiser “had not yet set up an auxiliary [union] for Negroes.”  Bowing to Albrier’s threat of a lawsuit and pressure from the African American community, the Richmond union agreed to accept her dues and transfer them to an auxiliary in an Oakland shipyard.

Frances Mary Albrier became the first black woman to be hired at Shipyard Number Two in Richmond.  Reporting to work outfitted in welder’s regalia, her presence amazed the black shipwrights.  She explained, “Well, I just happened to bust my way in here.” Albrier remained in the forefront of the fight to end auxiliaries and saw success with the 1945 James v. Marinship decision that outlawed auxiliaries.   Frances Mary Albrier continued the fight for equality and social justice throughout her life.  She received numerous awards for her lifetime of service, including the NAACP’s “Fight for Freedom Award,” and a citation from the California State Assembly for her “outstanding record of achievements in public service.”