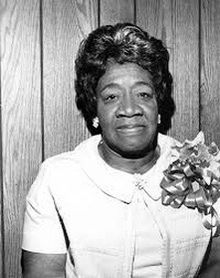 Williams, born September 13, 1904, to Reverend Adam Danial Williams, minister of Ebenezer Baptist Church in Atlanta, Georgia, and Jennie Celeste (Parks) Williams. In high school Alberta graduated from Spelman Seminary (now Spelman College). She later earned a teaching certificate at Hampton Normal and Industrial Institute (now Hampton University) in 1924. After her graduation Williams announced at the church her engagement to Michael King (who would later change his name to Martin Luther), who she met before she left for Hampton Normal and Industrial Institute. The couple married November 1926, on Thanksgiving. In 1938 Alberta King graduated from Morris Brown College receiving a Bachelor of Arts.

Prior to her marriage Williams was a teacher, however she was forced to quit her job because married women in Georgia were prohibited from teaching. The newlyweds resided at Williams’ family home, which in 1980 was designated a National Historic Site by Congress. Alberta King was instrumental in founding the Ebenezer choir and serving as its director for almost 25 years until accompanying her son, Rev. King Jr. with his work between 1955 and 1963 when she returned to Ebenezer. She retired from official church duties in 1972. Mrs. King was Ebenezer’s organist (1932-1972), the organizer and president of Ebenezer Women’s Committee (1950 – 1962), organist for the Women’s Auxiliary of the National Baptist Convention (1950 – 1962), and active in the organizations: National Association for the Advancement of Colored People (NAACP), Women’s International League for Peace and Freedom, and Young Women’s Christian Association (YWCA).

Tragically, during a Sunday service on June 30, 1974, just as she finished playing “The Lord’s prayer” on the organ at Ebenezer and while the congregation prepared for prayer, an assassin, standing on a pew near the front of the church, went to the pulpit, faced the choir, and pulled out a gun and opened fire. Firing every round Alberta King was hit, along with Edward Boykin, a church deacon, and Jimmie Mitchell, a member of the church’s congregation. Mrs. Alberta Christine Williams King was 73 when she died.