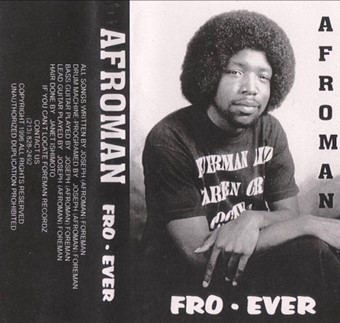 Rapper, lyricist, guitarist Afroman adopted the stage name after being teased about his Afro Hairstyle by a girl during his youth, was born Joseph Edgar Foreman on July 28, 1974, in Los Angeles, California. As a child, he played drums at church. However, when he was 13 years old, he began creating lyrics and beats at home and selling them as mixtapes to schoolmates. During his high school years, he wrote a rap about his teacher and sold more than 400 copies. Attempting to get entrenched in the rap music industry, Afroman in 1991 dropped out of Palmdale High School.

In 1998, Afroman’s debut album My Fro-losophy was released but it was a “flop.” The following year, 1999, he released Sell Your Dope and later moved to Hattiesburg, Mississippi, which he still calls home. There he teamed up with drummer Jody Stallone and keyboardist/bassist Daryl Havard.

Two years later in 2001, he released the single “Because I Got High” from the studio album The Good Times, a compilation of the rapper’s first two albums under the Universal Records label. “Because I Got High” peaked at no.1 on the United Kingdom (UK) chart and no. 40 on the Billboard R&B chart. It was also a hit in Australia, Austria, Germany, and New Zealand and eventually sold more than 500,000 units worldwide and was nominated for a Grammy Award for “Best Rap Solo Performance” in 2002. Later that year Afroman released “Crazy Rap” from the Sell Your Dope album and it reached no. 10 in the UK.

Afroman’s album Drunk’n’High and the holiday work, A Colt .45 Christmas, were released in 2006. His studio album, Frobama: Head of State, came out in 2009.

In 2014 Afroman released a remix of his Grammy nominating song, “Because I Got High,” using it to promote the legalization of marijuana throughout the United States. Overall, Afroman has produced 32 albums during his career. His last albums were Happy To Be Alive (2016) and Cold Fro-T-5 and Two Frigg Fraggs (2017). He is married to Angie Foreman.

Ed Nimmervoll, “Artist Biography: Afroman,” https://www.allmusic.com/artist/afroman-mn0000128681/biography; Harley Brown, “Exclusive: Afroman Remixes ‘Because I Got High’ in Support of Marijuana Legalization 13 years after “Because I Got High,” Afroman has remixed his paean to the pitfalls of smoking weed for a new cause: marijuana legalization, Billboard Magazine, https://www.billboard.com/music/music-news/afroman-because-i-got-high-remix-marijuana-legalization-6281761/; Robbie Daw, “Where Are They Now? Catching Up With 2001 Stars Afroman, S Club 7, American Hi-Fi & More,” Billboard Magazine, https://www.billboard.com/music/pop/where-are-they-now-2001-interviews-afroman-s-club-7-9553965/amp/.