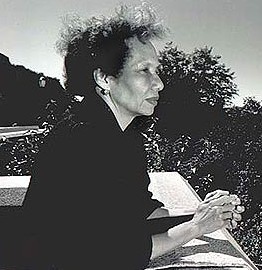 Adrienne Kennedy has earned a place as one of contemporary America’s most renowned and admired African American authors, lecturers, and playwrights. Kennedy was born in Pittsburgh, Pennsylvania on September 13, 1931 to Cornell Wallace and Etta (Haugabook) Hawkins. Kennedy spent her childhood in Cleveland, Ohio, where she attended public schools.  She graduated from Ohio State University with a B.A in Education in 1953. In May of that same year she wed Joseph C. Kennedy with whom she had two children. After the birth of her oldest son, Kennedy continued to pursue her education by attending Columbia University (1954-56), the American Theatre Wing, the New School of Social Research, and Circle in the Square Theatre School. Kennedy also participated in Edward Albee’s Theatre Workshop, in New York City.

Kennedy is most known for her role in the Black Arts Movement of the 1960s and early 1970s.  She was a founding member of the Women’s Theatre Council in 1971.  Her publications include An Evening with Dead Essex, The Owl Answers, Deadly Triplets, and A Movie Star Has to Star in Black and White. Other writings include the autobiographical works, Funnyhouse of a Negro and Pale Blue Flowers.

Kennedy also served as editor of Black Orpheus: A Journal of African and Afro-American Literature.

Adrienne Kennedy’s work explores the complexities of multi-racial people, a choice she claimed stemmed in part from her memory of her grandfather who was a wealthy white peach farmer.  That choice created conflict with other Black Arts Movement authors and critics who saw in her work ambivalent attitudes toward blackness.  Eventually many of the critics came to recognize her portrayals of the everyday African American experience and consciousness of pan-African politics as characteristics shared with other Black Arts Movement artists such as Nikki Giovanni, Amiri Baraka and Haki Madhubuti.

For her outstanding literary work Kennedy has received a Guggenheim Fellowship, the Anisfield-Wolf Lifetime Achievement Book Award, the Stanley Award, and in 1990 the American Book Award.  Adrienne Kennedy resides in New York City and continues to share her talents by lecturing at various institutions.