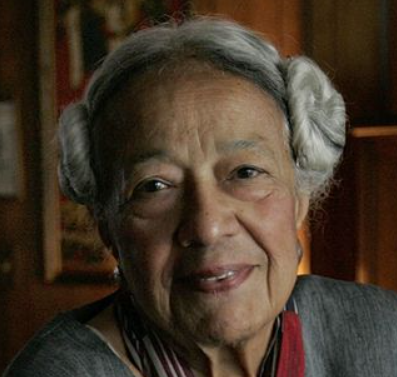 Adelaide McGuinn Cromwell was an accomplished American Sociologist as well as a pioneering scholar of Africa, African America, international relations, and women’s studies. On November 27, 1919, Adelaide was born to a prominent Washington, D.C. family. Her father John Wesley Cromwell Jr. was the first-ever black certified public accountant in Washington, D.C. Her “mothering aunt,” Otelia Cromwell, was the first African American graduate of Smith College in Northampton, Massachusetts. Adelaide’s cousin was the late U.S. Sen. Edward Brooke of Massachusetts who in 1966 became the first African American popularly elected to the U.S. Senate. Her son, Anthony Cromwell Hill, also earned a bachelor’s degree in Sociology.

In 1936, Cromwell graduated from Dunbar High School in Washington, D.C. and four years later she earned a Bachelor of Arts degree in Sociology from Smith College. As a College senior, Cromwell published a paper in the Journal of Heredity that was inspired by her research on the inheritance of piebaldism in three generations in her family. This rare genetic trait can give someone patches of white hair and depigmented skin.

In 1941 Cromwell earned a Master of Arts in Sociology from the University of Pennsylvania and a certificate in social casework from Bryn Mawr College in Pennsylvania in 1946. That same year, Cromwell earned a Ph.D. in Sociology from Harvard’s Radcliffe College. Dr. Cromwell’s research focus was on black leadership. Her dissertation, “A sociological study of Boston’s African-American elites,” was later published as a book titled The Other Brahmins: Boston’s Black Upper Class 1750–1950.

In 1960, Dr. Cromwell convened the first conference of West African social workers in Ghana. That same year, she was appointed to assess higher education in what was then called the Belgian Congo. She was the only woman and the only African American on a five-member committee commissioned by the Methodist Church in America. In 1983, Dr. Cromwell convened a conference of African American scholars and policymakers at the University of Liberia in Monrovia.

Professor Cromwell’s professional memberships include the Massachusetts Historical Society, the American Academy of Arts and Sciences, and the Council on Foreign Relations. She is a former member of the Board of Foreign Scholarships and the National Endowment for the Humanities. Additional publications include the books: Unveiled Voices, Unvarnished Memories: The Cromwell Family in Slavery and Segregation, 1672-1972 and An African Victorian Feminist: The Life and Times of Adelaide Smith Casely Hayford, 1868-1960. Cromwell also coauthored Apropos of Africa: Afro-American Leaders and the Romance of Africa. On May 22, 2011, Colby College conferred the honorary degree of Doctor of Laws, honoris causa on Professor Cromwell. Dr. Adelaide McGuinn Cromwell passed away on June 8, 2019 at the age of 99.