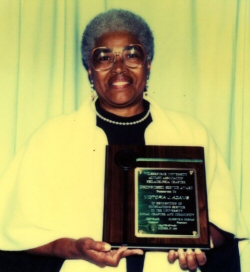 Born in Hattiesburg, Virginia on November 5, 1926, Victoria Jackson Gray Adams became one of the most important Mississipians in the Civil Rights Movement.  Her activities included teaching voter registration courses to domestics and sharecroppers, opening of the Freedom Schools during Mississippi’s Freedom Summer of 1964, and serving as a National Board Member of the Southern Christian Leadership Conference.  Gray began service as the field secretary for the Student Nonviolent Coordinating Committee in 1962.

After graduation from high school, Gray began her education at Wilberforce University in Ohio but was unable to finish due to lack of tuition funds. She later completed her education and became qualified as a teacher through her studies at the Tuskegee Institute in Alabama and Jackson State College.  In addition to being a teacher, she traveled the country as a lecturer and served as campus minister to Virginia State University.  Gray called herself a “spiritual and social activist.”

Gray was a founder of the Mississippi Freedom Democratic Party (MFDP) and was the first woman from Mississippi to run for the United States Senate. She ignored her own safety by running against outspoken segregationist John Stennis. Ms. Gray was accompanied by Fannie Lou Hamer and Annie Devine as the first three women to be seated as guests on the floor of the U.S. House of Representatives.  This was a result of these women challenging the all white segregationist politicians of the time. MFDP activities permanently changed the manner in which state delegates are chosen by the Democratic Party for its national conventions.

Victoria Jackson Gray Adams died at her son’s home on August 12, 2006.  Her papers, housed at Mississippi State University, form the basis for one of the largest collections of archival materials on the Mississippi Civil Rights Movement.