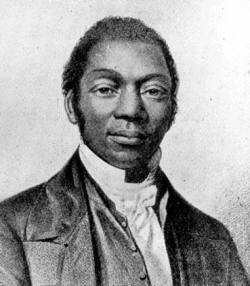 Born into slavery on the eastern shore of Maryland in 1807, James William Charles Pennington escaped from slavery in 1828 and settled for a time in Long Island, where he studied in night school.  Devoted to black education, he became an antislavery preacher, teacher, activist, and writer.  Pennington attended classes at Yale College in New Haven, although Yale forbade him to officially enroll or to use its library.  In 1838 he officiated at the wedding of Frederick Douglass and Anna Murray.  During the 1840s and 1850s he pastored African Congregational churches in Newtown, Long Island; Hartford, Connecticut; and New York City, gaining international recognition as an antislavery orator and civil rights activist.  Harriet Beecher Stowe in Uncle Tom’s Cabin praised him as an exemplary African American leader.  In addition to many sermons and speeches, Pennington authored one of the first history textbooks for African American teachers, A Text Book of the Origin and History . . . of Colored People (1841) and a memoir of slavery, The Fugitive Blacksmith, or Events in the History of James W.C. Pennington (1849).