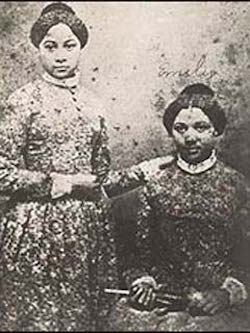 The Pearl Incident in 1848 was the single largest recorded escape attempt by enslaved people in United States history. On April 15, 1848, 77 slaves attempted to flee Washington, D.C. by sailing away on a schooner called The Pearl. They planned to sail south along Potomac River and then north up the Chesapeake Bay, cross overland to the Delaware River and then to the free state of New Jersey, a distance of nearly 225 miles.

The mass escape attempt was organized by both black and white abolitionists in Washington, D.C.  Free blacks Paul Jennings, the former slave of President James Madison, and Paul Edmonson, whose wife and 14 children were still enslaved, were the initiators of the escape.  They enlisted the help of William Chaplin, a Washington, D.C. white abolitionist who in turn contacted Philadelphia abolitionist Daniel Drayton, Captain and owner of The Pearl, and pilot Edward Sayres.  Wealthy abolitionist Gerrit Smith of New York provided financial backing for the escape.

With the help of numerous members of Washington’s free black community, 77 enslaved men, women, and children from across the city and surrounding areas slipped away from their places of work or residence on the evening of April 15 and made their way to The Pearl at a wharf on the Potomac.  They boarded the ship which set sail down the Potomac River and then turned north into Chesapeake Bay.  The wind was against the schooner, however, forcing it to anchor for the night.  The next morning, numerous Washington, D.C. slaveholders, realizing their slaves and The Pearl were missing, sent out an armed posse of 35 men on the steamboat Salem. The posse caught up with The Pearl near Point Lookout, Maryland, boarded the vessel, and took the slaves and the ship back to Washington.

Supporters of slavery were outraged at the attempted escape.  An angry mob formed and for the next three days lashed out at suspected white abolitionists and the entire free black community of Washington in what would be known as the first Washington Riot. The mob focused much of its wrath on Gamaliel Bailey and his antislavery newspaper The New Era.  Convinced that Bailey had helped plan the mass escape (he had not), the mob broke several windows of the newspaper’s office, but were held off by the police from harming Bailey.

Once the Washington Riot ended, the slaveowners sold the attempted escapees to slave traders from Georgia and Louisiana, who promptly took them to New Orleans, Louisiana. Two of the Edmonson children, Mary and Emily, were purchased and freed with funds raised by Henry Ward Beecher’s Plymouth Congregational Church in Brooklyn, New York.  Drayton, Sayres, and Chester English, the ship’s cook, were arrested and indicted for helping the slaves escape. They hired noted education reformer and Massachusetts Congressman Horace Mann as their main attorney. Drayton and Sayres were charged with 77 counts each of aiding a slave to escape and illegally transporting a slave.

A jury convicted both Drayton and Sayres but freed English believing he played no role in the attempted escape.  The captain and pilot were given prison sentences because neither could pay their fines and court costs which totaled roughly $10,000. After the men had served four years of their prison sentence, Massachusetts Senator and prominent abolitionist Charles Sumner petitioned President Millard Fillmore for their release.  The President pardoned Drayton and Sayres.

The Pearl escape attempt had unexpected consequences.  A provision of the Compromise of 1850 enacted by Congress ended the slave trade in the District of Columbia although it did not abolish slavery there. The Pearl incident is also said to have inspired Harriet Beecher Stowe in her writing of Uncle Tom’s Cabin which was published in 1852.