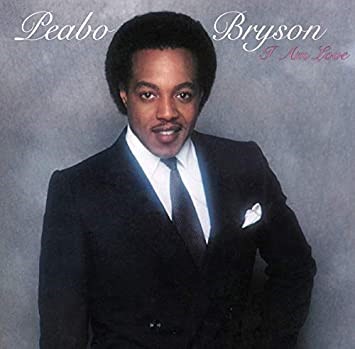 Balladeer Robert Peapo “Peabo” Bryson was born on April 13, 1951, in Greenville, South Carolina, to Marie Bryson. He has two sisters and a brother. His professional career began at 14 as a featured vocalist for the regional ensemble Al Freeman and The Upsetters. In 1967, when Bryson was 16, he was already a lyricist, arranger, and producer for Bang Records. He became a parent in 1968 to daughter Linda Bryson. By 1970, he was a principal singer with the Moses Dillard & the Tex-Town Display.

In 1976, Bryson released his first album entitled Peabo with Bang’s subsidiary Bullet Records. That same year, the album Underground Music came out. It peaked at no. 47 and stayed on the charts for six weeks. In 1977, he signed a contract with Capitol Records and his first album for the label, Reaching for the Sky, peaked at no. 6 on the R&B charts. The album included the singles “Just Another Day ” that reached no. 27 on the R&B chart and remained there for 14 weeks, and “Feel the Fire” which peaked at no. 13 on Billboard Hot 100 and remained charted for 17 weeks in 1978. The following year, 1979, “I’m So Into You,” reached no. 2 on the R&B chart and stayed up for 18 weeks. “We Don’t Have To Talk” in 1983 went up to no. 16 and remained charted for 17 weeks, while his duet with Roberta Flack, “Tonight I Celebrate My Love,” peaked at no. 5 and remained for 20 weeks.

In 1986, Peabo released the album Quiet Storm which included the singles “Good Combination,” which peaked at no. 44 and stayed up for 12 weeks, and “Catch 22” which peaked at no. 92 and remained charted for three weeks. The single hit “All My Love,” released in 1989, went up to no. 6 and stayed there for 17 weeks, while “Show & Tell” later that year made it to no. 1 on the R&B chart and remained charted for 16 weeks.

In 1998, Bryson performed the principal role in Sportin’ Life with the Michigan Opera Theater- Detroit’s version of Gershwin’s Porgy & Bess. This stellar performance was followed by his 1999 album Unconditional Love for the Private Music label. It peaked at no. 75 on the U.S. Top R&B/Hip-Hop Albums chart.

At age 56 in 2007, Bryson married 26-year-old Tanya Boniface, an England-born vocalist and former member of the British female group The 411. Although Bryson began as a solo artist, producing 21 albums, his duets with other artists and his recordings for films have been his most successful undertaking.