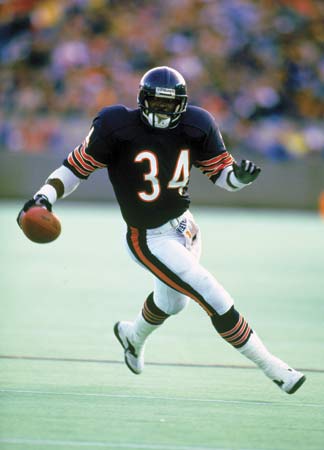 Professional football player Walter Jerry Payton was born on July 25, 1954 in Columbia, Mississippi. Walter was one of three children born to Edward and Alyne Payton. Young Payton played a number of sports with his brother, Eddie. Payton attended John Jefferson High School, an all-black school for his first 3 years of high school then in his senior year, he was one of the African American students who integrated formerly all-white Columbia High School. Payton played football all four years of his high school career. He then followed his brother, Eddie to play college ball at Jackson State University in Jackson, Mississippi.

Payton excelled at Jackson State, rushing for more than 3,500 yards and breaking into the National College Athletic Association (NCAA) record books by scoring 65 rushing touchdowns. Payton entered the 1975 NFL draft and was the 4th overall pick by the Chicago Bears. Payton’s first season with the Bears was not very impressive. He gained only 679 all-purpose yards and scored 7 touchdowns. His second season, however, was the beginning of his stardom; where he rushed for more than 1,000 yards and scored 17 touchdowns.

Walter Payton retired in 1988 and was inducted into the Pro Football Hall of Fame five years later in 1993. The Chicago Bears also retired his #34 jersey indicating he will always be known as one of the greatest running backs in football history.

In February 1999, Payton announced that he had a rare type of liver disease called primary sclerosing cholangitis. On November 1, 1999, Walter Payton died of the illness at the age of 45 in Chicago. More than 1,000 people gathered at Soldier Field for his funeral service.