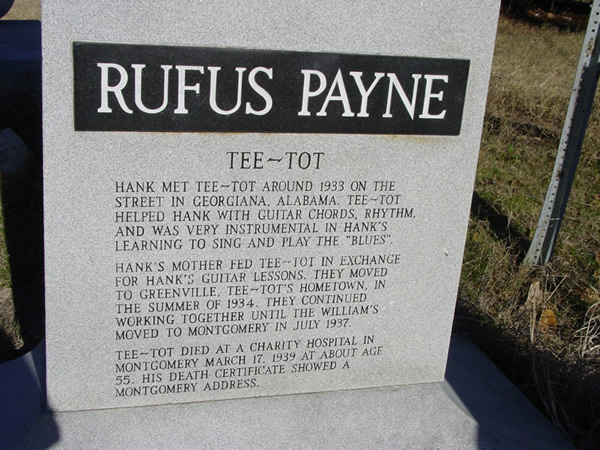 Rufus Payne was born on February 4, 1884, in Lowndes County, Alabama. His family moved to New Orleans, Louisiana, when Payne was a child, and he was drawn to the music he learned on the streets of that city. There he learned to play both early jazz and the blues.

It was also in New Orleans where he first gained the nickname “Tee Tot,” which was a shortening of the term “teetotaler” given to him by his friends sarcastically when he first learned to drink. They ridiculed his habit of always carrying a homemade mixture of alcohol and tea.

In 1915 at the age of forty-one, Payne returned to Alabama, began performing in local clubs, and soon developed a music following. Payne played all over southern Alabama wherever he could find a club, from Montgomery down to Greenville.  In 1932, while playing in Georgiana, Alabama, he met a young impoverished white boy name Hiram Williams. Young Hiram sold peanuts and shined shoes for all the workers that passed through the local railroad station. Hiram had a guitar but could not play it well. He asked Payne to teach him, and Payne began working with the budding musician. Although Hiram and his mother moved from place to place in Alabama, he always managed to stay in touch with Payne and continued to learn from him.

In 1937 Hiram and his mother moved to Montgomery, Alabama, where he started to sing in front of the WSFA radio studio in that city. Later that year, Hiram won a talent show at the local Empire Theater, and a producer at WSFA invited Hiram to start singing regularly on the radio. As his popularity grew, Hiram changed his name to Hank, and throughout the rest of his music career, he would be known as Hank Williams. Payne also moved to Montgomery, Alabama, but it is unclear the extent of their contact as Williams’s career as a country music singer began to take off.

Nonetheless, Payne had been an important mentor to Hank Williams. He taught the country music singer how to improvise chords on the guitar, and he influenced Williams by exposing him to blues and other African American musical influences. Williams, in turn, fused hillbilly, folk, and blues into his own style of music throughout his career.

Payne was never a successful blues artist and ultimately died at a charity hospital in Montgomery, Alabama, on March 17, 1939, at the age of fifty-six.  He was buried in an unmarked grave in Lincoln Cemetery in Kirkland, Alabama. Hank Williams’s son, Hank Williams Jr., paid tribute to Payne and the influence that the blues musician had had on his father, with his recording, “The Tee Tot Song.” Payne was also portrayed by African American actor, Rex Ingram, in the 1964 Hank Williams film, Your Cheatin’ Heart.