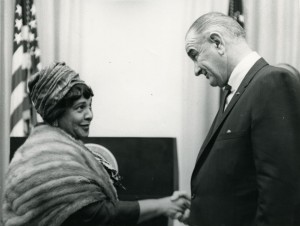 Pioneering journalist Ethel Lois Payne was born on August 14, 1911 in Chicago, Illinois to William A. Payne and Bessie Austin. Known as the “First Lady of Black Press” for her extensive list of accomplishments as a writer, journalist, and reporter, Payne, according to her colleagues, asked questions no one else dared to ask.

Payne attended Lindblom High School which was located in a white Chicago neighborhood. Despite the unwelcoming environment, she became an accomplished student in her English and history courses. One of her English teachers encouraged Payne to write and helped her with her first submission to a magazine.  The article was subsequently published. Payne pursued higher education at Crane Junior College and Garrett Biblical Institute, graduating from the latter institution in 1933. Upon graduation she decided to become a lawyer. The University of Chicago Law School, however, refused to accept her application because of her race.

Payne never became a lawyer.  Nonetheless, she devoted the rest of her life and career to racial justice issues.  In 1948, Payne responded to a Red Cross call-for-action to serve American forces in Japan and became a hostess for a military services social club. While in Japan, she met a reporter from the Chicago Defender, an African-American newspaper, and allowed him to take her journal back to his editors. Impressed by her writing, the newspaper used her journal notes to formulate an article about racially discriminatory practices in the U.S. military in Japan.  The article, the first of a series, was published on the front page of the Defender. In 1951, Payne was hired full-time by the Chicago newspaper and became the first African American woman to focus on international news coverage in addition to her national assignments.

Payne pursued assignments around the world. In 1955, she attended the Bandung Conference with the writer Richard Wright.  She covered the Montgomery Bus Boycott and the March on Washington. In 1966, she reported from Vietnam. and the following year she covered the Biafran War.  Her interviews with prominent leaders such as Dr. Martin Luther King, Jr., Nelson Mandela, and Senator John F. Kennedy made her a widely known and prominent global reporter.

In 1955, Payne was one of only three black journalists to cover the White House.  During one White House press conference she asked President Dwight D. Eisenhower what he was going to do to address racial disparities in the United States. His angry response made front page news the next day, but it also pushed civil rights issues to the top of the agenda for Eisenhower’s Administration and those that followed him. Her critiques carried significant influence at a time when U.S. State Department eagerly sought to depict to leaders around the world, and particularly in the new countries of Africa, the idea that American race relations were amicable.

After working with the Defender for 25 years, Payne in 1972 became the first African American woman to serve as a radio and television commentator when she was hired by CBS News. Throughout the 1980s she reported on apartheid in South Africa and worked for the release of Nelson Mandela.

Ethel Payne died at the age of 79 after a heart attack in Washington, D.C. on May 29, 1991. Her many honors included an award from the Capital Press Club in 1967 for her reporting during the Vietnam War and the TransAfrica African Freedom Award in 1987.