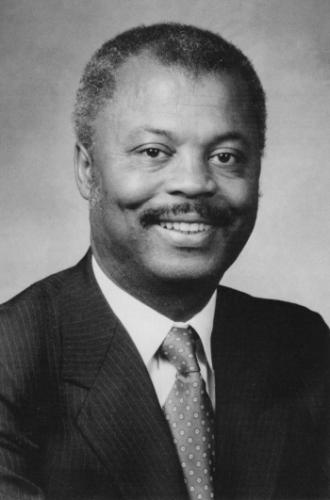 Donald Payne, a Democrat, was the first African American elected to Congress from the State of New Jersey.  Payne was born in Newark, New Jersey on July 16, 1934. He earned a B.A. degree in social studies from Seton Hall University in 1957 and also has honorary doctorates from Chicago State University, Drew University, Essex County College, and William Patterson University.

After graduating in 1957 Payne began working for the Young Men’s Christian Association (YMCA), traveling around the world as its representative.  In 1970 Payne became its first African American president. From 1973 to 1981 he chaired the YMCA Refugee and Rehabilitation Committee that was based in Geneva.  In 1972 he was elected to the Essex County (New Jersey) Board of Chosen Freeholders, and became its director in 1977.

Donald Payne challenged longtime Congressional incumbent Peter W. Rodino Jr. in the Democratic primary in both 1980 and 1986 but failed both times. In 1988 however, when Rodino said he would not seek a 21st term, Payne won nomination and was elected to Congress.

Payne was a former chairman of the Congressional Black Caucus, a member of the Democratic Whip Organization, and had been on the House Democratic Leadership Advisory Group and the Democratic Steering Committee. Payne received a presidential appointment in 2003 and again in 2005 from President George W. Bush to be one of two Congressional delegates to the United Nations.

Payne headed a presidential humanitarian mission to Rwanda, had been heavily supportive of the Northern Ireland peace process, and worked with the International Relations Committee to improve the Microenterprise Act, which provides loans to small business owners in developing countries. He also won the passage of a resolution condemning the genocide in Darfur, Sudan.

Payne gained national recognition when he was selected to manage the House debate over using force in Iraq in 2003. Congressman Donald Payne died in Livingston, New Jersey on March 6, 2012 from colon cancer.  He was 77.  He left behind three children and four grandchildren.