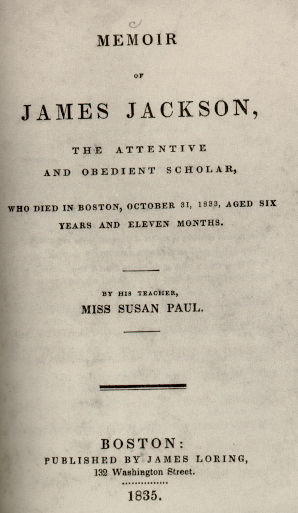 The youngest daughter of Baptist minister Rev. Thomas Paul and Catherine Waterhouse Paul, Susan Paul was a primary school teacher and an active member of the bi-racial Boston Female Anti-Slavery Society.  The Pauls were a highly regarded family in the free black abolitionist community in Boston.  Thomas Paul’s brother, Rev. Nathaniel Paul, was also an outspoken opponent of slavery. A minister’s salary afforded the family a modest income, thus, when Thomas Paul died in 1831, the family struggled financially.  Susan worked to support her widowed mother and the children of her dead sister as a seamstress and teacher.  Fortunately, abolitionist friends lent their material and emotional support to the Paul family.

Paul made her abolitionist debut in 1833 when she was invited to participate in a meeting of the New England Anti-Slavery Society. Paul did not speak at the meeting, but led a group of about 30 African American children from her school in song. Paul’s Juvenile Choir performed several patriotic, antislavery and anti-colonization songs before an appreciative audience.  For Paul, teaching was part of her activist mission within the abolitionist movement.  In addition to teaching, she also participated in antislavery organizational activities.  In 1837, she was one of two black women delegates at the Anti-Slavery Convention in New York.

Paul’s only known work is the Memoir of James Jackson, the Attentive and Obedient Scholar, Who died in Boston, October 31, 1833, Aged Six Years and Eleven Months, By His Teacher, Miss Susan Paul. Paul’s career ended abruptly in 1841 when she died of consumption in Boston.

Shirley J. Yee, Black Women Abolitionists: A Study in Activism, 1828-1860 (Knoxville: University of Tennessee Press, 1992) and Lois Brown, “Out of the Mouths of Babes: the Abolitionist Campaign of Susan Paul and the Boston Juvenile Choir,” New England Quarterly, 75 (March 2002): 52-79.