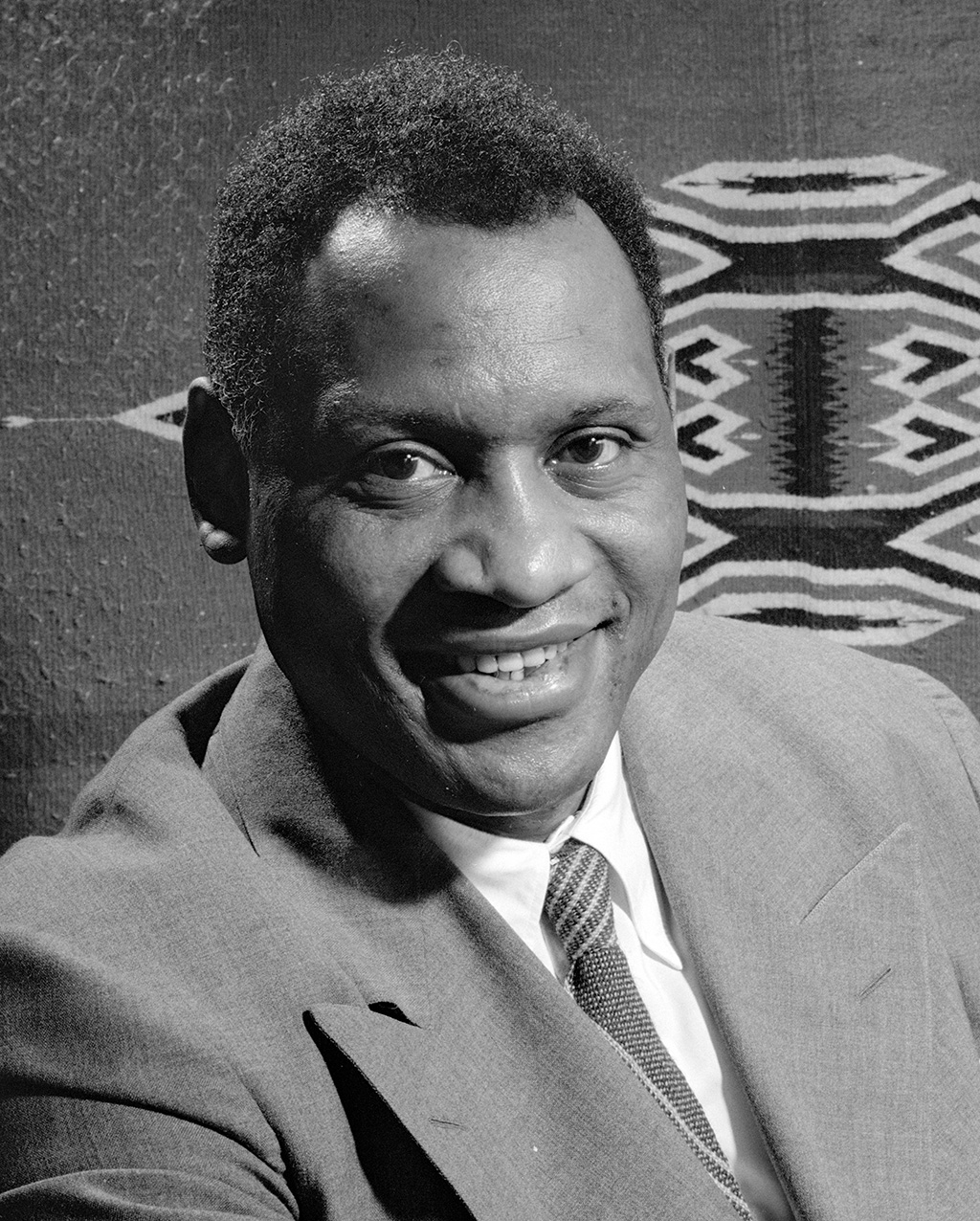 One hero and friend of Japanese Americans, both individuals and the community generally, was Paul Robeson. Robeson was (after Joe Louis) the most popular and visible African American of the 1930s and 1940s. He was a celebrated stage actor and movie star, an internationally famous folk singer, a champion athlete, a lawyer and orator, civil rights activist, and linguist conversant in some two dozen languages. Robeson remains known today chiefly as an uncritical supporter of the Soviet Union and the U.S. Communist Party. Because of his left-wing sympathies and advocacy of civil rights, he suffered severe repression during the 1950s. Although Robeson had been the highest-paid black entertainer in the nation during the prewar years, he was blacklisted and effectively unemployed for ten years, harassed by the FBI, and stripped of his passport.

While Robeson’s advocacy of friendship with the Soviet Union aroused the greatest public attention, his primary interest on the international scene during the 1930s and 1940s was Africa, whose nations were then struggling for liberation from European colonialism. Robeson considered himself African, and he championed traditional culture as a tool to give Africans the self-esteem necessary to achieve independence. He argued that the interest of Africans (and thus African Americans) lay in coordination with other groups, particularly those which had powerful cultural traditions from which Africans could draw strength. For example, Robeson was a fervent admirer of Jewish culture and worked to build coalitions between Blacks and Jews in the United States. He also admired China, studied Chinese language, and sang Chinese folk music in his concert programs. In the years from 1939 to 1941 (when Robeson followed the Communist Party’s overall anti-militarist line) he threw himself into support for the struggle of the Chinese people against the Japanese occupation. Robeson appeared at rallies for China relief and recorded an album of Chinese songs.

Despite his concern for Asian liberation, Robeson was largely silent during the 1930s about racial discrimination against people of Asian ancestry, especially on the West Coast. Nevertheless, his talent and his insistence on racial equality made him widely admired among Japanese Americans. In 1941 Nichi Bei columnist George Jobo rhapsodized about Robeson’s singing, “Inadequate vocabulary of your writer fails to describe the rich simplicity of Mr. Robeson’s voice as well as his ability to hold the audience spellbound to his very last notes.”  Meanwhile, the Nichi Bei reported exultantly on Robeson’s victorious suit against the proprietor of a Bay Area café that had excluded him on racial grounds. In 1942, a club at Santa Anita Assembly Center played and discussed Robeson records.

Once war began, Robeson interested himself in the condition of Japanese Americans, with whom he felt an immediate kinship. In February 1942, Robeson was approached by the sculptor Isamu Noguchi, who had founded a progressive group called Nisei Writers and Artists Mobilization for Democracy. Noguchi asked Robeson to join a blue-ribbon panel of prominent non-Asians who would testify to the loyalty of Japanese Americans before Congress, in order to avert mass removal. Robeson readily volunteered to appear in support of Nisei. The panel idea was dropped once President Franklin D. Roosevelt signed Executive Order 9066, but Robeson’s offer of action impressed many Nisei. He remained attentive to Nisei concerns in the years that followed. In a 1943 speech, he praised “the workers from Mexico and from the east–Japan and the Philippines–whose labor has helped make the west and the southwest a fruitful land.” In 1946, he publicly opposed the Canadian government’s movement to deport thousands of Japanese Canadians. To demonstrate his solidarity, Robeson accepted an honorary life membership from the Japanese Canadian Committee for Democracy.

Meanwhile, he sang and spoke before Japanese American audiences on several occasions. In April 1946, he gave a concert in Salt Lake City, Utah, then home to the Japanese American Citizens League (JACL), to an audience composed in significant part of Japanese Americans. Although he did not refer directly to the Nisei in his remarks, he spoke out in favor of “equal economic rights” for all races. His talk was widely reported in the Nisei press, and community reaction was so favorable that Japanese American groups in Chicago invited Robeson to be a guest speaker at a Memorial Day banquet honoring Nisei veterans. At the banquet, Robeson denounced racial discrimination in America as a fascist doctrine and reminded the veterans that the victorious struggle against fascism had to be continued at home. “Your fight is my fight,” he stated.

The following year, Robeson returned to Salt Lake City to give another concert. Afterwards he granted an interview to Pacific Citizen editor Larry Tajiri, himself an outspoken partisan of collaboration between Nisei and blacks. Tajiri reported that Robeson was “sharply aware of the evacuation and of wartime prejudice against the Nisei. He said he would like to include a Japanese song in his program, a song of the common people to help fight discrimination against Americans of Japanese origin. It is all part of one problem, he noted, this matter of discrimination and it may be the foremost question facing us today in the atomic age.”

Robeson seems not to have found a Japanese American song to his liking, for he did not add one to his repertoire. However, he came into contact with the problems of the Nisei again in 1948 when he became a supporter of Henry Wallace’s Progressive Party. At the party’s convention in Philadelphia, Robeson joined forces with Dyke Miyagawa and Chiye Mori, delegates from the Nisei for Wallace (AKA Nisei Progressives), to push for civil rights planks in the party’s platform. The Progressive Party went on record in favor of evacuation claims for former camp residents, repeal of discriminatory laws against Japanese aliens, plus equal immigration and naturalization rights. During the campaign, Robeson organized a fundraising concert tour in Hawaii. There the largely Asian American workforce gave him what he later called the warmest reception of his life. Characteristically mixing music and politics, he added: “I managed to learn some of the songs of the people from the Philippines, of the Japanese Americans.”

Paul Robeson showed warm solidarity with Asian Americans, though their struggles were never a central area of interest for him. In return, the Nisei press devoted numerous articles to him, and offered other support. In 1949, when a Robeson concert in Peekskill, New York was attacked by right-wing vigilantes, numerous Japanese Americans traveled up to attend the replacement concert. The next year, when Rutgers College alumni tried to strike Robeson’s name from the college roll, Gordon Hirabayashi wrote a column in the Nisei journal Northwest Times praising Robeson’s Americanism and support for democracy and fair play.