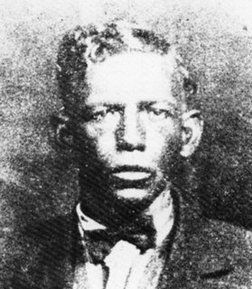 Charley Patton, born in Hinds County, Mississippi near the town of Edwards, is by consensus the Father of Delta blues and one of the most important American musicians of the 20th century.  Legendary bluesmen Son House, Howlin’ Wolf, Robert Johnson, Muddy Waters, John Lee Hooker, and Elmore James all trace their blues style back to Patton.

In addition to being a bluesman of the highest order, Patton might have also been the first rock and roller. He played the guitar loud and rough, often playing behind his knees and back and leaping about like a man possessed. One can begin with Patton’s protorock roots and see them extend to Howlin’ Wolf, then into Little Richard, James Brown, and ultimately Jimi Hendrix.

Although generally considered to be African American, Patton’s ancestry was a mixture of white, black and Cherokee. One of his grandmothers was full blood Cherokee. Patton described that mixed heritage in “Down the Road Blues,” singing of having gone down to “the Nation” and “the Territo” which was the Cherokee Nation of Indian Territory (now the eastern half of Oklahoma) where a number of black Indians tried to obtain entry to the Indian rolls and thus claim land, a legal battle which continues to this day.

When he was a child Patton’s family moved from the Mississippi hill country to the Delta to work on the Dockery plantation. It was here that both John Lee Hooker and Howlin’ Wolf came under the influence of Patton. Here he also came into contact with Henry Sloan, one of the earliest Delta bluesmen.

By age 19 Patton had become an accomplished performer and songwriter. Patton hoboed around the Delta playing parties, one-room juke joints, and levee camps, often with guitarist and friend Willie Brown. Patton finally got a chance to record in 1929 after he auditioned for Henry Speir, a white music store owner. Spier contacted Paramount Records and set up a recording session in Richmond, Indiana. On this session Patton recorded fourteen sides, one of which, “Pony Blues,” became his first released recording and ultimately his trademark tune.

In 1934, despite failing health, Patton traveled to New York City to record for the American Record Company. One of the songs he cut, “Oh Death,” was tragically prophetic. Just a few months later, Patton died of a heart condition. He was forty-three years old. Charley Patton was inducted into the Blue’s Foundation Hall of Fame in 1980.