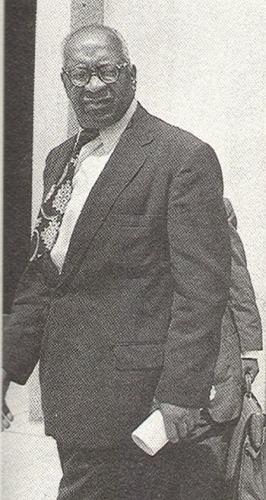 William L. Patterson, born in San Francisco on August 27th, 1891, was a Marxist lawyer, author, and civil rights activist. His mother had been born a slave on a Virginia plantation in 1850 and lived there until she was ten. Before the outbreak of the Civil War, Patterson’s mother was liberated and sent west to California, where she met James Edward Patterson, William’s father. Although his family was forced to move from home to home and often struggled with poverty, William L. Patterson managed to graduate from Tamalpais High School at the age of 20 in 1911. Patterson then attended the University of California on and off until he was forced to leave because of irregular attendance.

In 1915, Patterson enrolled at the Hastings College of Law of the University of California in San Francisco. While attending law school, Patterson began to read The Crisis, the official magazine of the National Association for the Advancement of Colored People (NAACP), and became interested in various Marxist and Socialist publications such as The Masses, and The Messenger. After graduating from Hastings with a law degree in 1919, Patterson joined the NAACP.

Soon after graduation Patterson traveled to London, where he met Robert Lansbury, editor and publisher of the London Daily Times, the newspaper of the British Labour Party. After writing an article for the Daily Times on the problems facing the African American population, Patterson returned to the United States where he vowed to fight for racial justice and equal rights.

By 1923, Patterson had settled in New York.  He and two other young lawyers, Thomas Benjamin Dyett and George Hall, opened a law office in Harlem. The firm of Dyett, Hall & Patterson specialized in civil rights issues. The majority of Patterson’s law career involved arguing cases which emphasized and protected the rights of African Americans and individuals Patterson considered wrongly convicted of criminal acts. These cases included the defense of Nicola Sacco and Bartolomeo Vanzetti, and work on the Scottsboro case.

In 1951, Patterson presented his landmark study “We Charge Genocide” to the general assembly of the United Nations. In it Patterson charged the United States government with the genocide of the African American people. The study documented hundreds of cases of murder, bombings, and torture of African Americans over the past century. It provided details of the “mass murder on the score of race that had been sanctified by law” and stated that “never have so many individuals been so ruthlessly destroyed amid so many tributes to the sacredness of the individual.”

Patterson published other significant works in his lifetime including Ben Davis: Crusader for Negro Freedom & Socialism, and The Man Who Cried Genocide. In the 1960s Patterson defended Angela Davis and leaders of the Black Panther Party who were subject to arrest.  Patterson also served as executive secretary for the International Labor Defense, and leader of the Civil Rights Congress, organizations which fought for African American rights.  William L. Patterson died in New York City in 1980.