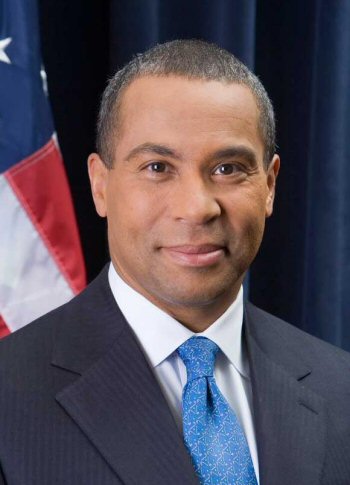 Deval L. Patrick, Governor of Massachusetts, was elected in 2006.  He became at that time the second African American elected as a state Governor in the history of the United States.  Patrick was born on July 31, 1956 in Chicago to Laurdine “Pat” Patrick and Emily Mae Wintersmith, and raised in the Robert Taylor housing project on that city’s “South Side.”  His father’s career as a jazz musician (with the Sun Ra band) often took him away from home. Occasionally, Patrick travelled with his father, especially to New York City, where he often stayed with the family of the African drummer, Babatunde Olatunji and his wife Amy. After his  parents were estranged, Patrick and his older sister were raised by his working mother.

Benefiting from “A Better Chance,” a national non-profit organization which identified and recruited academically gifted African American students, Patrick was selected to attend Milton High School Academy.  Upon his graduation in 1974 he entered Harvard University.  After completing his undergraduate education at Harvard in 1978, Patrick worked for one year for the United Nations in the (pre-genocide) Darfur region of Sudan.  He then returned to Harvard to earn a law degree in 1982.  Two years later he married Diane Bemus, a labor and employment attorney for the NAACP Legal Defense and Education Fund.

Deval Patrick then served as a law clerk for 9th Circuit U.S. Court of Appeals Judge Stephen Reinhardt and as a staff for the NAACP Legal Defense and Education Fund.  In 1986 he joined Hill and Barlow, a prominent Boston’s law firms, rising to partner in 1990.  Patrick represented Desiree Washington, the former Rhode Island beauty queen in her civil lawsuit against former heavyweight champion Mike Tyson.

President Bill Clinton appointed Patrick Assistant Attorney General for Civil Rights in 1994, where he established a distinguished record prosecuting hate crimes and church bombings, employment discrimination, and fair lending cases.  He was also a staunch defender of affirmative action which was increasingly under attack, and he challenged racial profiling practices of law enforcement agencies across the nation.

In 1997, Patrick left the Clinton Administration and worked as Vice President and General Counsel for Texaco.  In 2000 he was named Executive Vice President of Coca-Cola, a post he held until 2004.  In both positions and as a board member of several major charities, Patrick was particularly concerned with reforming corporate cultures relating to employment and workplace equity.

In 2006, Patrick challenged the political establishment in Massachusetts when he declared his candidacy for governor.  He created a campaign on the themes of “together we can” and “hope and change” which capitalized on an unprecedented wave of youthful enthusiasm and engagement.  Defeating two powerful rivals in the Democratic Primary, he went on to win the governorship over Lt. Governor Kerry Healy, a Republican and two other opponents, garnering nearly 56% of the vote.

In his first eighteen months in office, Governor Patrick implemented the country’s most comprehensive state level health care system that newly insured over 350,000 people, many of them children. His social policy and services initiatives included ending homelessness and addressing domestic violence.  He also helped defeat a ballot initiative to ban same-sex marriage and repealed a nearly century old marriage law that he claimed would keep “governmental regulation out of deeply personal choices between loving adults.”

Deval Patrick was an early supporter of Illinois Senator Barack Obama in his campaign for President.  Patrick’s 2006 election themes and slogans in his successful quest for the Massachusetts Governorship served as a model for the national Obama campaign in 2008.